When I first met Robert Shetterly in the 1980s, he was drawing illustrations for the alternative weekly Maine Times. His illustrations, like his paintings at the time, were surreal and fanciful, strange and smart.

Angry and disturbed that the United States was about to invade Iraq in the wake of the 9/11 attacks, Shetterly, who lives in Brooksville, decided to channel his anger into something positive: A series of portraits of Americans he admired, a series he called Americans Who Tell the Truth. The first portrait was of poet Walt Whitman.

The original idea was to paint 50 portraits and be done. The “Americans Who Tell the Truth” series now stands at more than 250, each one taking the form of a head-and-shoulders painting of the subject against a monochrome background with a quotation from the person portrayed scratched into the surface of the paint.

“Americans Who Tell the Truth” became a book in 2005 and this year has inspired a documentary film about the project by Richard Kane of Kane-Lewis Productions in Sedgewick. The one-hour film, “Truth Tellers,” will be shown virtually at the Camden International Film Festival, through Sept. 27. Kane plans to do the film festival circuit before showing his new film in theaters around Maine and, with any luck, on public television.

Kane, who has worked with Shetterly on several Maine Masters artist profile films, calls “Truth Tellers” the “most challenging film I’ve ever made and also the most critical.” The film, like the Maine Masters profiles, was sponsored by the Union of Maine Visual Artists.

It focuses on racial justice and climate change, but Kane is already envisioning a sequel tentatively called “Truth Tellers: Money, Power and War.”

Shetterly chooses his subjects in terms of how the truths they tell speak to the values underlying American society, values we rarely live up to. As such his gallery of portraits features civil rights leaders, peace activists, feminists, environmentalists, Native Americans, and whistleblowers.

The portraits range from historic figures – Susan B. Anthony, Sojourner Truth, Harriet Tubman, Frederick Douglass, and W.E.B. Du Bois to Malcolm X and Martin Luther King Jr. – to contemporary activists such as Zyahna Bryant, the high school student who petitioned the city of Charlottesville, Virginia, to take down its statue of Robert E. Lee, and Bree Newsome Bass, who took it upon herself to climb the flagpole outside the South Carolina Statehouse and remove the Confederate flag.

The portraits are profiles in courage that celebrate the power of the individual in service of the common good. There is a sense of urgency informed by optimism in the film.

“If we are going to wait for someone else to solve these problems,” says Penobscot attorney Sherri Mitchell, speaking in the film to the tribe’s efforts to preserve nature, “we are all going to die.”

Shetterly eventually plans to give his entire portrait collection to an art or educational institution. That institution might once have been Syracuse University, the only place the entire collection has ever been exhibited.

Syracuse used Shetterly’s paintings across the curriculum for several years until some members of the board of trustees became concerned that some of Shetterly’s subjects might upset people at the Pentagon who provided some funding for the university.

“This isn’t meant to be political,” Shetterly insists. “It’s about the ideals of the country.”

But, of course, it is political. There are a few Republican truth-tellers such as Smith and President Dwight D. Eisenhower, but most would be considered progressive or liberal, including academics Bill Ayers, Noam Chomsky, and Howard Zinn. Truth to a progressive looks like propaganda to a conservative.

“Truth Tellers,” like “Americans Who Tell the Truth,” is positive, upbeat, optimistic, and idealistic, especially given the fact that things have gotten much worse in this country since Shetterly started the series in 2002.

Still, both artist Shetterly and filmmaker Kane are hopeful that problems facing America and the world can be solved by speaking truth to power in a dialogue inspired by images. Shetterly has taken as his motto the quote scratched into the surface of his portrait of playwright Arthur Miller:

“I think the job of an artist is to remind people of what they have chosen to forget.” 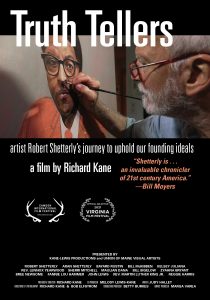