A year after Maine’s courts shut down at the pandemic’s onset, jury trials are coming back to Cumberland County.

Jury selection began last week and on Monday Superior Court Justice Thomas Warren said orientation has begun, although no trial juries had been seated and even this progress was thrown into doubt because a new COVID-19 outbreak at the Cumberland County Jail could prevent people held there from appearing in court.

Still, Warren said, trials should proceed. There are many “old cases,” he said, where the accused are out on bail, and those defendants should be able to appear in person. 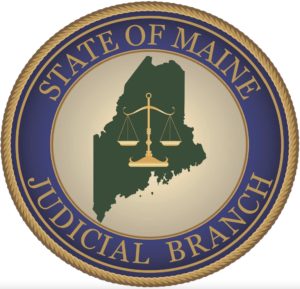 Cumberland County is in particular need of jury trial capabilities, said Justice Michaela Murphy – who’s been tasked with coordinating jury procedures by Acting Chief Justice Andrew Mead of the Maine Supreme Judicial Court – because it handles the largest number of criminal cases. And, unlike several other counties, it has had no juries empaneled since March 2020.

Jury selection began last week in Waldo County, and will soon resume in Kennebec County, where Murphy presides. Penobscot County will pick a jury for a single murder trial before Justice Robert Murray.

All three of those courthouses are new and have relatively spacious courtrooms that allow distancing for jurors, both for selection and trials. That’s not the case at 205 Newbury St. in Portland, Murphy said.

“In the old building, there are two large courtrooms” – one for Superior Court, the other for the Supreme Judicial Court – “where you can seat 20 or 25 people.” The newer, 1990s addition, however, “has courtrooms that are way too small,” she said.

With Maine State Police announcing they expect “normal” levels of arrests in response to reports of aggressive driving, courts may see even more criminal cases by summer. Murphy said the statewide backlog, which has jumped 53 percent since February 2020, hasn’t diminished.

Even limited trials can help. Although Kennebec County held just two jury trials last September before shutting down again, numerous other cases were resolved through settlements. “We’re not as hard-pressed as Cumberland (County),” Murphy said.

Although criminal cases get priority under court rules, the gridlocked general civil docket, which includes jury trials, may finally get help, too.

Murphy and a dozen attorneys are testing jury selection, and potential trials, by Zoom based on a successful online system in King County, Washington, where Seattle hosts the world’s largest concentration of high-tech companies.

“We don’t have that kind of money; we’re using our regular Zoom accounts,” Murphy said. But if the trial attorneys agree, she said, remote civil trials could start up soon.

Douglas Rooks has been a Maine editor, commentator, reporter, and author since 1984. His new book is “First Franco: Albert Beliveau in Law, Politics and Love.” Visit  douglasrooks.weebly.com/#/ or e-mail [email protected].