‘Memory is a funny thing,” are the first words we hear from Tony Baxter (Tony Aidan Vo) in the serialized audio thriller “Dark Tome: Undertow.”

This opening sequence is steeped in Tony’s memory. Through an ethereal aural montage of his childhood moments in rural Maine, we hear sound memories seep and shift: he and his sister shout as they race to a rope swing, the river’s rush yields to the scrape of a hinge, young laughter morphs into the honks of geese.

Joy is definitely not what these memories bring to Tony, who lost his sister those years ago. In fact, his memories have pretty well shattered him. And when he finally returns to where it all began, he’ll be forced to contend with powerful forces both supernatural and quintessentially, wrenchingly human.

Recorded entirely during pandemic lockdown over the last year (on Zoom, and with hours of “socially distanced field recording” of real-world sounds) “Undertow” streams on Stitcher Premium, with its final episode dropping this week, on March 18.

While “Undertow” can be enjoyed as a standalone drama, it’s also the third season of Greenhalgh’s larger “Dark Tome” franchise, so some listeners might already be familiar with Tony’s creepy-evil hometown of Simpson Falls, a place generally rich in diabolical weirdness.

In this season, investigative journalist Tony is sent back to Simpson Falls with photojournalist Sonia Proud (Stephanie Diaz) to cover the opening of a new “boutique hospital.” That sounds freaky even without the demons and occult forces that also turn out to be part of the picture, in this town that’s already been transformed by the forces of unemployment, opioid addiction, and regret.

Early in the story, we flash forward to foreshadow the most ominous act that will happen here – sounds of beeping, as a deep, clearly nefarious voice says, “This is going to feel weird” – and then the sound of a dial ratcheted ever higher with Tony gasping and moaning.

An artifact, a certain tome, is said to be powering the machine Tony is in. Finally, the deep voice says, “See you on the other side,” and there’s a silvery, spiraling, slicing sound, like an inter-dimensional blade. Then, silence.

So we know that Tony has found whatever there is to look forward to in Simpson Falls. As soon as he and Sonia arrive, they’re dealing with monsters, a mysterious young boy, and an asshole sheriff (Peter Berkrot) who turns on his lights when he sees their Massachusetts plates – and also, perhaps, upon seeing Latinx Sonia in the driver’s seat.

People here are pretty odd, and/or interesting. Some are suspicious, like the Sheriff, while others are unreadable, like Ricky (the nicely ambiguous Jason Grasl), Tony and Sonia’s Airbnb host, and also – what a coincidence! – childhood friend of Tony and his sister.

Then there are the ominous people who run the hospital, Dr. Leopold (Richard McGonagle, sensually corrupt) and Cynthia (Kim Gordon, deliciously icy). And then a bevy of local-color residents, from the drunks and the guys throwing bricks at Ricky’s house to the bickering, wackily nerdy team of Digby and Madge (Ray Porter and Wendy Tremont King, in a fun duo), who run a tour and podcast about the Dark Tome.

The entire ensemble numbers more than 40 actors from across the country, many of whom will be delightfully recognizable to local theatergoers: along with local actor Gordon, we hear from Moira Driscoll, Lisa Stathoplos, Maiya Koloski, William Steele, and Denise Poirier (an audio legend herself, of course, as the starring voice of the animated MTV series “Æon Flux”). They even got Tim Sample!

These character roles are drawn specifically enough to feel solid and entertaining, and the fuller characterization of Tony and Sonia is carefully and empathetically drawn. Each has their own traumatic backstory, and in Vo’s and Diaz’s hands, they modulate well between vulnerability, rage, and snappy good humor. Their irritable, cuss-riddled, brother-and-sister-like rapport has great candor and authenticity.

As the action rises, the plotting is brisk, scrappy, and deft in balancing the supernatural world-building (the existence of the multiverse; the Tome as “a chaos agent”) with comic relief and profane banter (a heated argument about whether whoopie pies are actually pies). As the flashbacks and flash-forwards gradually approach resolution (amidst lots of high-octane sound design, conjuring now a scuffle with law enforcement, now a shrieking leech monster), the central concerns are not just horror-fantasy tropes, but archetypal themes of memory and grief. And it’s all drawn by sound alone.

Listening to podcasts is de rigueur these days, but audio drama feels different. It opens up more of a space for visual imagination, letting us do our own conjuring to see our own version of this town and people, one informed by our own lives. As such, audio poses an especially apt medium for exploring memory.

And “Dark Tome: Undertow” pulls us into its current with wit, verve, and lots of compassion. 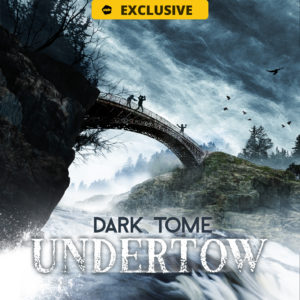 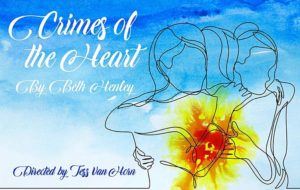 • If this week’s review piqued your appetite for audio drama, check out the University of Southern Maine’s production of “Crimes of the Heart,” Beth Henley’s beloved comedic story of three sisters. Originally scheduled to be performed on stage last spring, director Tess Van Horn and her cast of student actors (and some recent grads) have now transformed it into a radio play. Purchase access to the recording, which is available through April 16, at https://bit.ly/3thkqqh.

• Portland Stage Company’s Clauder Competition plays have been announced, and the winners are being featured this spring in the Little Festival of the Unexpected. Since the festival’s debut in 1990, winning plays have been given a public workshop reading; this year you can tune in on Zoom. This year’s Grand Prize winner, which will be a PSC Mainstage production in 2022, is Greg Lam’s “The Last Ship to Proxima Centauri,” a speculative fiction in which ex-pats from a ruined earth manage to emigrate to another planet, only to find “a planet full of unimpressed people of color who are not happy to see them.” Watch the workshop reading on Zoom on Friday, March 26, at 7 p.m. You can also watch a reading of Gold Prize-winning “In His Hands,” Benjamin Benne’s play about two men’s unlikely romance, on Friday, April 9, at 7 p.m. Visit https://bit.ly/3bO0rd7.

• Last spring, the Bare Portland performance collective’s extraordinary theatrical experiment “[Storage],” driven by the group’s year-long exploration of an abandoned storage unit and the vicissitudes of the word “possession,” was shut down prematurely by COVID-19. (Read my review here.) But those who missed it now have a chance to experience it from home. Viewers can watch a recording of the performance, explore an online archive of the process, and view a documentary about the making of the show. Available through April 16. Go to http://www.bareportland.org/.

• Finally, hear what’s happening with your local artists at the latest installment of Mad Horse Theatre Company’s Artist Chit Chats, on Friday, March 19, at 7 p.m. This month’s artists will be talking about pandemic-era art creation and diversity, equity, and inclusion in the arts. They’ll include Suze and Mel Quackenbush, of Shakespeare & Shenanigans; James Patefield of PortFringe and BarePortland; Brie Roche of Brie’s Best Guests; Grace Livingston Kramer of Penobscot Theatre Co, and poet and activist Maya Williams. Go to madhorse.com.