One of the interesting things to watch as cannabis has become legal and come into the mainstream is the emergence of cannabis culture into Maine’s pop-culture spaces. Take for example September’s Reggae Garden Show at York’s Arrowheads Estate, a posh farmhouse wedding site. With a dozen cannabis firms sponsoring, attendees dropped $25 for lawn games, heavy apps, a “free dab bar” (this seems marginally illegal, but we ain’t the cops), DJs, and live bands under a tent, all in a “lush, backyard garden” setting.

The architect behind this get together was none other than Zeke Stern, one of the pair of producers known as Green Lion Crew, which has become one of the hottest indie-label producers in the reggae and dubstep scene, frequently working with some of the most interesting names in Jamaica and throughout the Caribbean. Stern just happened to go to York High School and keeps Cape Neddick as a home base as he nears 25 years of putting on reggae and dubstep shows, and he’s well known to anyone who’s hit places like Harry Brown’s Farm up in Starks and other cannabis-consumption friendly haunts. 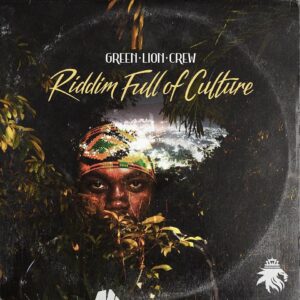 As that sort of thing reaches the homes of suburban soccer moms, Green Lion Crew are stepping up their game, too, with a new release on Ineffable Records that features vocals from authentic and talented trad-reggae artists that might well appeal to folks who had that Bob Marley “Legend” album in college. “Riddim Full of Culture,” with 17 tracks of features, has plenty of contemporary production. But it clearly takes inspiration from early dub pioneers like Mikey Dread (the album’s title is taken from his 1979 track “Headline News”), Lee “Scratch” Perry and others who realized the instrumental tracks behind reggae vocals were ripe for remixes.

These backing tracks are often called “riddims,” and Green Lion Crew here has done something interesting in using four different sets of songs where the core riddim is carbon copy, but vocal delivery so different you might not notice the instrumental is the same. They’re not shuffled up, but rather tracked to emphasize the association. The result puts the talents of the vocalists on display and might engender a deeper appreciation for reggae’s versatility.

“Keep Blazin’” is the sort of classic reggae you might be used to — “sinsemilla, you are my healer” — with chiming upstroke guitar, a walking bass, plenty of hi hat and the reserved, deep-voiced Jamaican accent of Roe Summerz crooning. MediSun takes that same bed and makes it almost R&B, interspersed with quick delivery like the French rappers do and a more religious bent, celebrating the reign of Ethiopian Emperor Haile Selassie, the Rastafari deity, since “politician have no vision / They don’t listen to what the people say.” Then Tydal Kamau brings the swagger in with “Golden,” riding the downbeat with a clipped accent that just rolls off his tongue in immaculately crisp bars.

What a triptych. Is it a little weird to listen to an album where multiple songs in a row open with the same sounds? For sure. Might some of the more balladic pieces get a bit sentimental and repetitive? Tastes vary. But if you’ve exclaimed with pleasure having found an Augustus Pablo LP in a crate at a yard sale, you’re going to have a good time listening to the two tracks with son Addis Pablo supplying melodica lines, which contrast especially well with the powerful monotone delivery of Mr. Williamz on “Politricks.”

And there are one-offs, too, like the “In This World” single with Busy Signal, which opens the album with an inspirational vocal performance, where every syllable is in the right place, making the heart race. Green Lion Crew’s talent here comes in staying out of the way, with little doses of triangle and horn pops from Jon Persson that act like hype men. “Days of Old” stands on its own, grounded with a left-hand piano line and Capleton vocals that seem to be coming from the earth’s core.

Make sure to stick around for the finish, too, because Chino’s “Praise Jah” is a standout, with an acoustic guitar foundation and a swing that might just create some converts. The lord may no longer be a living man — Selassie was strangled in his bed in 1975 — but Green Lion and company make a good case for him. Follow the rhymes wherever they take you.

Uno Lady – “A New Day” | The opening track from “Le Flux,” here we find a series of loops and ethereal vocal tracks like everything else on this album and accompanying short film by Christa Ebert, the result of her residency at Chateau Orquevaux, in France. It’s as delightfully weird as that sounds, yes.

Just Milk – “We’re Here” | Spare and organic, this is among the more cohesive tracks on a full album of captured sounds, synths and samples that sometimes last less than a minute and sometimes sprawl out for five or six. It’s soft and inviting.

Micodin and Dynamo-P – “Hit the Ground”| Part of the “Happy to Be Here” LP, I was hoping this was a riff on the classic 6gig track. Not so much. But it’s still a great little Golden Age kind of track, full of vinyl samples and straight bars.

Oshima Brothers – “Last Minute Lover (live)” | If you’ve ever wondered how those two Oshima Brothers make so much noise, check this out: Jamie plays the whole thing by himself, developing the backbeat on the drum kit, looping it, then playing guitar and keyboard and singing the whole tune through. Impressive stuff.

Unicorn Death Squad – “Masterpiece of Steel” | Geoff Cannon is a one-man death-metal band who’s moved from the other Portland to Fort Fairfield to set up shop. This, like the rest of “Return of the Cryptic Bastard,” is primal, loud, and a little rough around the edges.