There was lots of talk early in the pandemic about the great art that would be made. So many people home, with nothing but time, surely would produce a new flight of works, no?

Well, so far, mostly not. At least in the music biz.

With socially distanced studio time hard to come by, full-band albums, especially, have slowed to a trickle.

But there’s more to it than that. For so many musicians, going out, stealing ideas from seeing other bands, and just generally being among people is pretty key to songwriting. Heck, people are barely dating now – that’s got to put a damper on break-up albums.

So, what Pete Kilpatrick’s done with “Songs from the Green Room” isn’t the obvious solution it might seem. Sure, lots of other people invested in recording gear as he did in putting together a home studio when everything went sideways. But making an album isn’t exactly recording a podcast. And Kilpatrick had a track record of great albums already in the catalog dating back 15 years, with high standards to live up to. Capturing great sound in your living room, with consistent input levels, is a lot harder than just plugging in a mic. 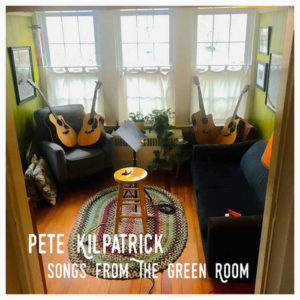 Plus, Kilpatrick’s been busy keeping 5- and 8-year-olds occupied.

He’s right to be happy with the resulting five songs, created in tandem with Pete Kilpatrick Band guitarist Pete Morse, who remotely tracked additional instruments and mixed and mastered the project at his Red Vault Audio studio. They are a warm, mostly hopeful, somehow upbeat, yet wistful exploration of being cooped up and scared. Sometimes they’re even just regular-old good songs.

“Exit Signs” gets straight to the point, an atmospheric swirl of ocean sounds behind Kilpatrick’s vocals, still clear and resonant, but beginning to deepen as he ages:

“I gotta get out, been stuck in my head/ I been having my doubts/ Yet I’m feeling the dread/ We’re all reading the news/ Searching for hope in the headlines/ Observing the cues/ Yeah we’re following guidelines.”

Kilpatrick has a way of swallowing closing syllables that sounds like he’s been listening to the Avett Brothers, rounding off edges. But as he moves into the second verse, there is more fervor, an electric guitar swerving in. This is the defiant stage of the pandemic: It won’t get me.

By the third verse, though, those doubts begin to take root: “Despair/ It’s lurking in the shadows/ It’s rattling our bones.” The menacing entreaties to “stay strong” in the roiling finish can only be for his own benefit.

Truly, Kilpatrick has become a songwriter’s songwriter and took the time available to him to really hone these lyrics and play with arrangements. His phrasing is exquisite and he’s able to elicit knowing nods in the span of a couple verses. In the narrative “Evangeline,” Kilpatrick plays with the love-triggering trust of taking someone’s hand for comfort and what can be conveyed with a tremble.

“Have you lost your mind,” he asks, “getting mixed up with a boy like me?” Of course, it’s hard to imagine a boy mom would be happier seeing coming through the door.

Kilpatrick is introspective, calm, and meditative on the album-opening “Just Be,” like Jack Johnson without the surfer aesthetic. And there’s a hicuppy guitar to pop in and make sure nothing gets too dour: “Who’s going to turn off all the lights when you’re fast asleep?” With the finishing mandolin brightness, there might even be some 1980s Phil Collins in there.

God, that guy was charming.

But time, Kilpatrick notes, is the “Rearranger.” With a quicker burn, a piano line building in, Kilpatrick is all of us when he promises “Spring is at the window/ We will all be out in time.” Didn’t we think that? That summer would make it all go away?

And then it didn’t. So it’s easy to empathize with the naked desperation of “Rose,” which opens with the only piece on the album where it’s simply Kilpatrick and an acoustic guitar. While layers build in, with more mandolin and a clapped percussion, it ultimately all resolves to the repeating mantra that closes out the song and album:

“Hope, stand by my side/ When I’m taking on water/ When I’m struggling.”

Maine seems to be calling to any number of expats these days.

• Amy Allen, “Heaven” — Her third single of the COVID-19 era, Allen here tackles substance-use disorder and its insidious grip. She continues to impress with her acoustic guitar lines and ingenious remixes of verse-chorus songwriting. This song ends and you’d swear it was just getting started. Which is likely the point.

• Lisa/Liza, “From This Shelter” — The first release from an upcoming full-length record with Orindal Records, this a quiet and wispy piece that calls to mind ’60s Cambridge and the folk revival. She calls to you like someone just on the edge of your consciousness.

• Pink Polar Bear, “Time To Chop Off Their Heads” — From the five-song self-titled debut, this is a ferocious piece of stoner rock featuring a message with which it’s easy to empathize. And you don’t hear a lot of singing drummers in power trios nowadays.

• One P, “50’s Glamour Model” — A skittering and bouncing piece, with strong flavors of Manu Chau and the Mediterranean, this comes off the six-song “Masterpiece on Blank Canvas.” The vocal effects are heavy, but in a more frenetic way than the mainstream trend.

• Zach Jones, “I’ll Be Taking Care of You” — The B-side off his latest single, this track has strong vibes of a buddy comedy, with linked arms, side-by-side under an umbrella in the rain, laughing all the way. Jones carries his falsetto effortlessly through virtually the entire track, silky smooth.

Portland brothers brew a beer for Indian food, and to address...