Ken Curtis was born in Curtis Corner, a tiny hamlet in the small Androscoggin farming town of Leeds – “really just a railroad depot,” he calls it. His Curtis ancestors came to America in 1640, and some settled in Maine around the turn of the 19th century.

Curtis’s roots here are deep, but from an early age he displayed a restless ambition that drove him all the way to the Blaine House by the time he was 35.

He was the first Maine governor to serve two four-year terms, from 1967-75, and his imprint on state government may be larger than all of his successors combined. The shape of both the executive and legislative branches is largely the result of his administration.

At the time there was high demand, among Republicans and Democrats, for improved public education, a state university system, environmental protection and better public services at all levels. And Curtis accounted for that demand through a progressive income tax, enacted in 1969, that still provides the lion’s share of state revenue.

From the 10th floor conference room overlooking Portland harbor at Curtis Thaxter – the law firm he co-founded in 1975, after leaving Augusta – he recently reflected on events that occurred half a lifetime ago. He has lived most of his adult life in the Portland area – “in Portland, South Portland and Cape Elizabeth,” he said. “During my low-income years I lived in Portland.”

He met his wife, Polly, when both were working at Sears Roebuck in downtown Portland, before it moved to the mall, and they have been married for 63 years. In the Blaine House, they were – for Maine – a glamorous couple, with two young daughters, reminding many of John and Jackie Kennedy; Robert Kennedy campaigned with Curtis in 1966 and predicted his victory.

After living for a decade in Florida, they returned to Maine two years ago, and are now in Scarborough. At age 88, Curtis displays the warmth, curiosity and keen interest in visitors that were his hallmark during his political career – as well as an unusual degree of modesty. He disclaims any particular knowledge about current affairs, and is skeptical that anyone would care about what he has to say.

After a bit of prodding, it turns out he’s adept at relating present to past.

When he was governor, Curtis said, “The big problem was that Maine’s a state of small towns. There were a few cities, like Bangor and Portland, where you could combine all the services you need, the colleges and hospitals, so these are the areas that attracted people.”

Though rural areas enjoyed growth during the 1970s and early 1980s, urban areas are probably even more dominant now. “I see so many similarities with Maine back then,” he said. “We’re still a large state with a small population, and it seems impossible to find all the resources that are needed.”

Curtis is pleased with the work he did in coordinating the scattered campuses of Maine’s teachers colleges with the “land grant” campus in Orono, the University of Maine. An important part of the University of Maine System initiative, Curtis said, was to provide “the quality and marketing for students” so the fledgling liberal arts colleges could share Orono’s prestige.

“It was a move toward at least some equality of higher education,” he said. “That part worked very well.”

And he applauds the expansion of the community college system.

“A lot of these kids didn’t think they could go to college, and they found it wasn’t that difficult, and they’re able to transfer into something they wouldn’t have ever started,” Curtis said. “I feel very encouraged about the direction of higher education in Maine.”

Among the changes in northern Maine is that military bases – once including Air Force bases in Presque Isle, Limestone and Dow – are long gone. Bringing people back to these areas will require better services, “but it’s very difficult,” he said.

Still, “You have to find a way to do it,” Curtis said. “You have to have the economic incentive. People coming for its rural attractions is fine, but that’s like moving into another world.”

When Curtis was governor, the emphasis was on industrial development, since Maine – hard as it is to believe today – had a high proportion of manufacturing jobs. Today, the focus must be elsewhere. Curtis points to the proposed redevelopment of Saddleback ski area as one possibility.

“That’s a community that has grown around recreation,” he said. And he thinks the latest investor group will succeed. “I like the idea that they’re trying to raise a couple million dollars from local people. It gives them a feeling of being part of it.”

Perhaps the most startling innovation of Curtis’s administration was the adoption of a state income tax, which he championed in the face of skepticism from Republicans and many Democrats – including Ed Muskie, one of his predecessors as governor.

“It’s still the fairest tax,” he said. “You’ll always have other taxes, but it’s the basic source of revenue. You have to reform the income tax, not abandon it. Part of the idea was to provide property tax relief, and it did.”

Curtis points out that small towns also have the smallest tax bases, and “to meet basic needs, they’ve got to be subsidized until they can grow. If you want to expand communities, you can’t overburden them with the property tax – which is a lot different than the Republican philosophy, who don’t want to overburden rich people, or big corporations. When you don’t overburden the property tax, you create growth.”

Eventually, he returns to the theme he began with.

Douglas Rooks has covered Maine issues for 35 years as a reporter, editorial writer, columnist and editor of Maine Times. 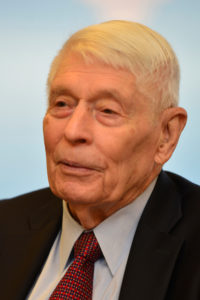 — Ken Curtis, on why he entered politics

“Party people looked at me with wonderment, to be polite about it, and rightfully so. I wasn’t a very polished candidate. I had a homemade campaign.”

“Ken Curtis assumed office determined that his would be a compassionate administration. Translated into new laws and a new philosophy of service, compassion would become the hallmark of the Curtis years.”

“I was the designated hit person, the one who suggested that Curtis wasn’t smart enough to pour piss out of a boot, but actually we worked very closely together.”

“If Gov. Curtis should lose, it would seem he has been too frank and honest for his own good. In the face of disaster at the polls, Curtis speaks out and is criticized for telling the truth … and for that reason alone, he should be re-elected.”

“The income tax is more popular than (Curtis).”

— Ed Muskie, after overwhelming defeat of referendum to repeal the income tax

“It is fair to say that no person is more responsible for the government we enjoy in Maine today, and that some would seek to dismantle.”

“As chief executive of this state, I am grateful for the groundwork laid by Gov. Ken Curtis. Gov. Curtis brought to the office a spirit of collaboration and bipartisanship.

“Because of his ability to connect with people regardless of their background or political affiliation, he was able to pass significant legislation, including critical protections for Maine’s environment and support for public education. He restructured and reorganized state government, consolidating several hundred departments and making government more efficient and productive. With bipartisan legislative support he created the Department of Economic and Community Development and the Department of Environmental Protection.

“Gov. Curtis sought out and attracted the best and the brightest to state government, people with creative ideas and a vision of the future. I would be proud to follow in those footsteps to the extent I am able in the coming years.” 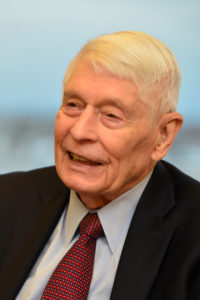