You also might feel cooped up, like you need to let off some steam. Maybe you’d like to yell at the top of your lungs a little bit? Well, I hope you can wait for the March 27 release of Lemon Pitch’s debut album, “Flat Black Sea,” because it’s perfect for all of that.

The result is a wildly appealing album that whipsaws all over the place.

Richmond’s tunes tend toward the shagadelic, bouncy and inviting, then growing ever more aggressive into their finishes. He’s the opener, with the title track, which often feels like a Blur song if Blur were a lot less clean and British. He rips off any number of complicated couplets early, but the close is a realization that “It’s turning out to be a problem,” with screams building in behind, and a rising in intensity as the phrase is repeated.

“Call Me Out” employs a similar construction, though the beginning is like being thrust into the middle of a song and his delivery is a little more sour. This time, the increasingly frenzied finish isn’t even a repeated phrase, but rather an old-time “baaah-bah-buh-bah” chant.

Merril leans more toward the indie rock, with an ironic delivery that might remind of Archers of Loaf or the Mountain Goats, and would sound at home on Merge Records. And while Richmond’s lyrics sometimes seem purposely nonsensical, Merril’s are rap-like in their complexity and analogies. He can “spend a whole week in the middle of the night” in the dynamic “Airtight.” And he follows the lurching opening rhythm of “Ginger Pins” with lurching rhyme schemes like, “you took your scythe and swung it wide/To reap the balance of the reasons you avoided suicide.”

He also, however, often features wild swings into anger, a building rage that explodes and releases.

Ginther? He doesn’t bother with the build and release on “The Kind of Band that Wears Hats” – it’s just full throttle from the get-go, in a gleeful punk piece full of distortion and crashing around like a super ball in a shoebox. One guitar pops chorded chunks while the other delivers single notes that maybe aren’t exactly what you’d call crisp.

But so what? This album ain’t about precision, even when Ginther’s tunes feature guitar solos, including “Toxic Costume.” It’s also where you’ll find the most notable harmonies, which come with the chorus after a halting start: “If you want to, we could argue/Tell the whole staff what we’re up to.” After the ramp-up, the big sound continues into the finish, under a gravelly delivery that features lots of vocal fry.

Ginther’s “God’s Teeth” is a personal favorite, a three-chord number that dives into alt-country, with details about a 40-acre farm and society “for the easily entertained/To pay off mortgages and cars.”

But who wants to think about that right now. Mortgages and cars are just one more worry we need distractions from. Luckily, Lemon Pitch are here to do the job. 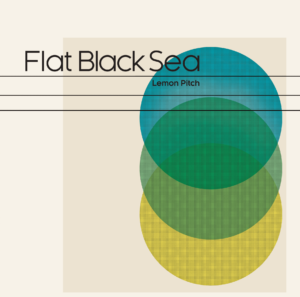 “Flat Black Sea” will be released on streaming platforms and for digital download March 27. Look for vinyl in April.

Well, folks, you really shouldn’t be going out to see music. Sorry about that. If shows haven’t canceled by press time, they’ll probably cancel shortly afterward. Maybe the governor will even close all bars and restaurants. We’ll see.

Regardless, this week we’ve put together a Maine Pandemic playlist:

“Common Cold,” by Rustic Overtones: “It’s either them or it’s one of us/But in the end, who you gonna trust?” Good question. One of the best tunes off “New Way Out,” you’ll find here some of Dave Gutter’s classic wordplay, horns that pop, and a beautiful little piano solo. Love the closing chant: “When you woke up in a cold sweat/You’re burning with fever.”

“Don’t Move,” by Isobell: The languid pace of this thing is desperate and longing, with spiraling guitars and periodic forays into a chaos that Hannah Tarkinson does her best to wrap around her finger. Her wail at the 3:30 mark – “try-yyy-yyy me” – is less a challenge than a begging plea.

“Fix Me Doctor,” by the Coming Grass: What’s better for lolling about in depression than alt-country? This quickly strummed waltz is crisp and emotive, with trademark harmonies from Nate Schrock and Sara Cox and plenty of apropos lyrics for the times: “Fix me, doctor, fix me up good/I’ve got every disorder in your little black book.”

“Time is Running Out,” by Jason Spooner: One of Maine’s best-engineered records, “Sea Monster” has no shortage of thoughtful, smartly crafted tunes, but this one is the melancholic absurdist tonic for our times: “He said, ‘I’ve had enough of political games/I’m a man of my word, I’m a dog in the rain/I’m a newborn baby at the top of the stairs/I’m a shadow of your doubt, I’m a wasp in your hair.’” If he says so.

“We’ll Still Be Here,” by Sontiago, featuring Dilly Dilly: A haunting piece, recorded so that you can hear every movement of the singers, this plays like death’s promise: “After the fun’s been had,” Sontiago and Dilly sing in tight harmony, “we’ll still be here/After we’re used to you, we’ll still be here.” Say it isn’t so.