Update: On March 12, after this story was published, organizers announced the Maine Jewish Film Festival would be postponed until fall because of concerns about COVID-19 and the coronavirus. For details, including information about ticket refunds, go to MJFF.org.

More than two decades ago, the Maine Jewish Film began as what its executive director, Barbara Merson, described as “a small group of friends watching movies in a community hall.”

Since then, MJFF has substantially grown that group of friends.

The festival now offers programming throughout the year and across the state, with events at multiple venues in Portland, Bangor, Brunswick, Lewiston, Waterville, and Rockland. This spring, MJFF returns for its 23rd year with a richly varied program of films about the Jewish experience.

Events start March 28, with a party at One City Center in Portland and an opening-night screening of “Fiddler: A Miracle of Miracles,” a documentary about the long-lived and magical international success of the famous musical.

There are some heavy-hitting films in MJFF’s program, but it also has a sense of humor, complexity, and light. The line-up includes films both political and whimsical, live-action dramas and experimental animation, one documentary about childhood sexual abuse (“Rewind”) and another about a gay comedian cancer survivor who converts to Judaism from Mormonism (“Latter Day Jew”).

Many selections address the ever-important subject of World War II, the Holocaust, and its survivors, but from a wide variety of angles: through a narrative drama about Freud (“The Tobacconist”), a documentary about baseball star-turned-spy Mo Berg (“The Spy Behind Home Plate”), and the story of a Holocaust survivor who started a famous swimsuit line in Tel Aviv (“Mrs. G”).

Other documentary subjects include an Israeli human rights lawyer (“Advocate”), the beloved New York City photographer Harold Feinstein (“Last Stop Coney Island”), and Josef Ganz, the man whose vision for the Volkswagen Beetle was hijacked by the Nazis. Dramatic feature films include the story of a 13-year-old Brooklyn boy who unites his half-Israeli, half-Palestinian family through food (“Abe)” and a satire about a bad soap opera and a border checkpoint (“Tel Aviv on Fire.”)

MJFF filmgoers can also encounter animations (several, actually), ancient manuscripts (“From Cairo to the Cloud”), and a food-crawl through Montreal with the Yiddish comedy duo Yid-Life Crisis (“Chewdaism: A Taste of Jewish Montreal”).

Such a dynamic range of films, plus a remarkably robust program of speakers and other screening-adjacent events (see sidebar), is right in line with MJFF’s mission: “To provide a forum for the presentation of films to enrich, educate and entertain a diverse community about the global Jewish experience.”

While MJFF doesn’t program with particular themes in mind, Merson said trends often emerge. She noted that several films in this year’s program are about women’s empowerment: In “#Female Pleasure,” five women from five different patriarchal cultures – including the Hasidic community – break the silence that those cultures enforce for women; and “What She Said: The Art of Pauline Kael,” is a portrait of the iconoclastic writer who penned pioneering film criticism in the late-1960s man’s world of The New Yorker magazine.

Another topical theme this year, Merson said, is the environment, with “Picture of His Life,” a portrait of wildlife photographer Amos Nachoum and his dream to photograph a polar bear underwater; and “Sustainable Nation,” about Israeli innovation in water sustainability. And 2020’s selections also reflect our current political moment, with films like “Alt Right: Age of Rage,” a portrait of modern white nationalism, and “Where’s My Roy Cohn?,” a doc about Trump’s unscrupulous power broker. 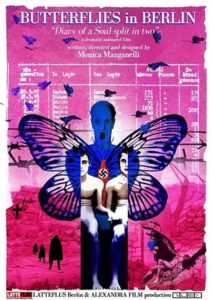 One of several special programs, Different Perspectives: Three Views of the Holocaust, epitomizes MJFF’s eclectic range of styles and viewpoints with three shorts that address the Holocaust in surprising ways.

“Edek” is an animated film about a Holocaust survivor who teams up with a Connecticut hip-hop artist. In “Mohammed and Anna – In Plain Sight,” we learn the lengths a Muslim Egyptian doctor went to save a Jewish girl in Berlin. And finally, “Butterflies In Berlin: A Soul Split in Two,” an animated short that employs a variety of film techniques, tells of a young man’s exploration of gender identity and the transsexualism studies of Weimar Germany on the brink of Nazi power.

As MJFF’s film offerings and venues have expanded over the decades, Merson said, so have its audiences and demographic reach – about 50 percent of MJFF filmgoers do not identify as Jewish.

“Now more than ever, it is important for people in Maine to watch films that deal with important themes and then talk about them,” she said. “The Maine Jewish Film Festival provides the materials and the opportunity for diverse groups to come together and have conversations about topics that matter.”

The Maine Jewish Film Festival has lined up a plethora of fascinating speakers for post-film discussions. Here are just a few (a full list and schedule can be found online): 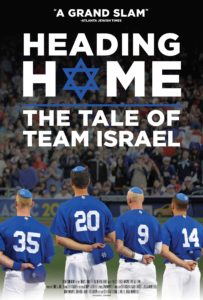 While these MJFF events are free, reserving tickets is still recommended: