A nurse, an engineer, a project manager, a small business owner, and a student are among the women sharing the hardwood at the Lewiston Armory this summer, where Maine’s new semi-professional basketball team is just a few weeks away from tipping off its first season.

The Lewiston-Auburn Maples, the 35th franchise in the Women’s American Basketball Association, began its first training camp last week with a large contingent of Mainers hoping to continue their hoops careers.

“I love playing basketball and I wanted to have a chance to compete for another year,” Freeport native and four-year University of New England guard Allie Goodman, 23, said. “I’m excited for this opportunity and to just promote basketball, make it grow, and be a part of something early on.”

The Maples opened training with 13 players, and a few late arrivals joined camp after finishing their professional seasons overseas. Some graduated college a decade ago, others within the last month.

The 33-year-old Vangelist played in the Women’s Blue Chip semi-pro league in California after graduating from college, but has only played recreationally and coached for the last few years. When she first learned of the team, Vangelist thought she’d coach.

“Once I got back on the floor, I was like, ‘Nah, I’m going to play,’” the instructional designer said. “Having two girls of my own (ages 4 and 6) I think it’s important to show my own girls and girls in the community that you can do what you put your mind to.”

The Maples are owned by Saco resident Joshua Brister, director of facilities at Cheverus High School in Portland. Sarah Soltan, of Winthrop, is the general manager. Jim Seavey, formerly the women’s basketball coach at UMaine Augusta and a 20-year high school girls basketball coach in the Portland area, is the team’s coach and president of basketball operations.

The Lewiston City Council approved a five-year armory lease with the team last October, allowing the Maples to host between eight and 12 games, plus playoffs, for the cost of rent and an annual $10,000 payment toward the building’s capital improvement fund.

The Maples will play four regular-season home games Sundays at 2 p.m. beginning July 10 through October, plus playoffs, if needed. Seavey expects the team to practice two or three times a week during the season, including one practice the night before each game to go over the opponent’s scouting report.

The WABA includes teams from across the country, including Atlanta, Cincinnati, and Tampa. The closest team to Lewiston is the New England Trail Blazers of Medfield, Massachusetts.

Lewiston Mayor Carl Sheline was on hand for the team’s first practice and said he plans to attend home games throughout the summer. He said he hopes the team succeeds on the court, but also in the community.

“I wholeheartedly believe that having a (semi-)professional sports team at the armory is going to drive economic development,” said Sheline, who played high school basketball in Arizona. “It creates a positive image for Lewiston, and I’m excited about that.”

Last winter, the Maples supplied meals and other assurance to several local families. The team is supplying the Auburn-Lewiston YMCA and local Boys & Girls Clubs with 50 tickets per game and is already planning a back-to-school bash and school supply drive in September.

The team name was originally Maplewoods and pays homage to the area’s Franco-American heritage, Brister said. The home white jersey features “The Lew” and jersey numbers in gold script outlined by an amber tone, like maple syrup.

The WABA allows each team to spend up to $12,500 on player stipends. The Maples are still deciding how to divide the funds.

However that shakes out, it’s not the priority: Fontaine, for example, left the first practice to attend her SMCC graduation, and Goodman starts work soon as a full-time nurse at Mercy Hospital in Portland.

“None of us can quit our day jobs and do this,” said Seavey, who works in logistics for the Portland office of electrical distributor WESCO. “We do this because we have a passion for it and love the game.”

Portland native Greg Levinsky writes the monthly Game On column for the Phoenix. He can be reached at [email protected]. 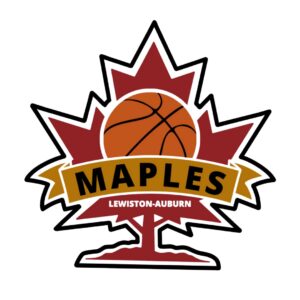