Maybe you’ve seen “Dead to Me?” In the award-winning half-hour dark-comedy series, Christina Applegate plays a suburban real estate agent, with two boys in a well-appointed house, whose husband has been killed by a hit-and-run driver.

Turns out he was cheating on her, etc. I don’t mean to ruin it; that’s basically the opening.

This leads to scenes where she drives around in her expensive car and blasts death metal as loud as it will go. We are meant, maybe, to consume the scenes as amusing juxtaposition: the blonde-haired, pant-suited, put-together Applegate indulging in the white-hot, rage-filled cacophony that is stereotypically the cultural terroir of men in black T-shirts and studded wristbands. Haha?

I hope, though, that it is more normal than not for people to use loud and aggressive music to work through their rage at life’s very unfairness. What else is it for? What else are we to do when the meanness of our existence makes itself apparent? Not everyone can sob in the dark to Sufjan Stevens (though that can also be fulfilling).

For Mouth Washington, a heavy and dark and caustic band that has been playing Portland for more than a decade, the meanness of existence has always been an artistic inspiration. They would have us know their new (fifth) album, “Remiss,” in production since the early days of the pandemic, explores the gruesome Maine story of Constance Fisher, a Fairfield woman who on two separate occasions drowned three of her own children.

It is a story too inhuman to really intellectually understand, but it is the truth: She drowned her three children in a bathtub in 1954, was institutionalized in Augusta as mentally ill, and then repeated the inexplicable act in 1966 after her husband successfully had her released back into his home and resumed their marriage.

But now Mouth Washington releases the 12 songs inspired by this awfulness on Friday with a show to celebrate the life of their late keyboardist and guitarist, Will Held, who died at 33 in May, his parts already recorded indelibly. It’s hard to imagine what that will be like, emotionally. It seems impossible.

What is the alternative, though? Should they scrap the album they’ve painstakingly recorded? Call it quits?

None of that seems better. Life goes on, regardless of our desires or desperation. And Mouth Washington provides us here with catharsis, something that may be in high demand nowadays when life can make little sense. If ’70s rock anthems seem inadequate, try “Constance,” which opens like a big rock song, if ragged around the edges, a head-nodder that is undone by the manic pace set by drummer Zach Hansen. Mouth Washington is intense, but somehow never menacing; they are kind in their anger, almost inquisitive. And when it ends it’s like someone just pulled the plug and they are milking the last bits of life in the line.

On many songs here, they open quietly, maybe with just some keyboards, or with a bass-driven melody, before firing in with a full-band entry charged with Max Hansen’s shouted vocals. It’s like they are constantly reminding us they do, indeed, have feelings, and they appreciate the value of a good cry, but that’s just not how they process things. These songs – as they proved in live streams during the pandemic – can operate in many forms, without drums and acoustic, maybe even with glam and vamp, but the raw and unbridled fury is the point.

When Max screams on “Statue” for the antagonist to “just go!” it is the precise distillation of the first time being caught in something truly shameful, an anger that is directed both outward and inward equally. The guitar and drums, in opposing channels, run in parallel streams. In “Ichor,” though, Max accusingly yells, “you’re not here!/ You’re not here!” and then moves into an almost conversational tone that is equal parts accusatory and conspiratory.

“It was clear that nothing mattered.”

Cynicism is the easiest of escapes. We are all of us just meat puppets, after all. But Mouth Washington largely avoids it, taking us into the emotions we want least to admit we experience: fear, selfishness, uncertainty, paranoia, despair. It is wrapped up in their very delivery, a brutalism, a smashing and pounding, a practiced carelessness.

By the closing “Both Necks,” where Ian Geirhan’s bass is the funkiest and the guitars are charged up like someone simply turned a knob, “there’s nothing left to say” – “the devil, he wants me!/ He wants me!” Emotionally exhausted or invigorated, the listener must choose: Is that a welcome invitation being related or a threat?

The answer might depend on the minute of the day. Listen again and see if it changes. 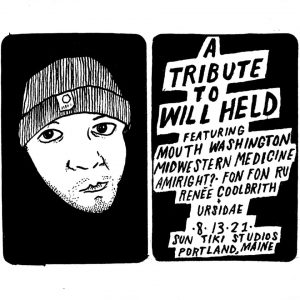 • “With You,” dilly dilly — Released as part of El Gran E Record’s “Mikwendaagozi: She Is Remembered” compilation, this is alternately playful and morose, droning and cycling, and a fitting piece for a project that seeks to raise money and awareness for missing and murdered indigenous women. The compilation features 23 women from around the globe, including fellow Mainer Lisa/Liza, whose “Sundown Song” is a stripped-down acoustic guitar piece in the ’60s folk tradition.

• Xander Nelson, “In Time” — Following in the footsteps of Sparks the Rescue and Even All Out, Nelson taps into the pop-punk vein with a catchy single that’s “as witty as Mrs. Maisel,” managing to be late-’90s and right now at the same time.

• Fred Copeman, “Mere Mortals” — The first single from Copeman’s second EP, this all-instrumental affair has a touch of “Kiss from a Rose” and shows off the former SeapeopleS keyboardist’s relentless positivity.

• Wildflower, “Golden” — A psych-rock piece that sounds plucked from 1970s California, Adrian O’Barr’s high keen pierces through languid guitars: “the apples all had fallen, riding on the crystal leaves.”

• Modern Clarion, “Back Again” — The first single off the “Smoke & Kindling” EP, this debut signals the appearance of a new big-band rock band in Maine, somewhere between Springsteen and Tom Petty, full of piano and organ.