Nine months ago the biggest problem many of us faced, the topic that dominated the news, the question that consumed many of our waking hours was:

How would we wipe our butts without toilet paper?

You remember. It was back in late March and early April, while the coronavirus was turning New York City upside down, and all anyone in the rest of the country – including here in Maine – could think about was how to get their hands on that next roll of TP. 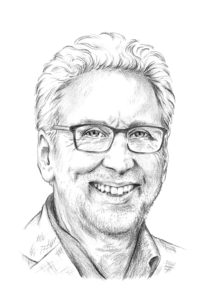 Yeah, there were other things we hoarded – hand sanitizer, Clorox or Lysol wipes, paper towels. But toilet paper, that was huge. That got us out of bed early in the morning, to line up at Hannaford or Shaw’s for rations of the stuff. (“No sir, I don’t care if there’s no sign in the aisle,” the store manager told a guy ahead of me. “You can’t buy more than two packages.”)

We never imagined it would eventually be the least of our worries.

After all, we could understand COVID-19 slithering like a hungry worm in the Big Apple, where the people ride shoulder to shoulder in a hole in the ground that was seemingly made to spread disease.

Here in Maine, we were immune. We measured new daily COVID-19 cases in single digits. Our hospitals never approached being overwhelmed. Dr. Nirav Shah, head of the Maine Center for Disease Control, became a celebrity because his daily updates were more like pep talks or reassuring fireside chats where he encouraged us to stay the course. Heck, people from New York, New Jersey, and other so-called hotspots started moving here (and driving up real estate values) because the virus had finally proved the tourism marketing pros were right: Maine really was the way life should be.

We basked in a long summer, with amazing weather and vehicles banned from streets that allowed restaurants to serve diners al fresco. By August there were afternoons and evenings when the crowds in the Old Port almost made it feel like the good ol’ days. The tourists came, they left their money, they went home, and we survived.

And we had stopped paying attention to the toilet paper supply.

Life was good. Or so we thought.

Because too many of us started to believe Maine really was different. We assumed that just because most of us drive everywhere in our own cars and trucks, and some of us live in rural areas and never set foot in a “big city,” and because Dr. Shah had some kind of superpower, we were somehow immune.

So while many Mainers have continued to protect themselves and each other, too many others have let down their guard. They have gathered at weddings, funerals, and birthday parties. Employers have called people back to work in offices and factories. As the autumn chill took over, there were more indoor gatherings without appropriate masking and distance. And for Thanksgiving, too many of us decided we just could not live another day without the traditional family get-together.

So we expanded our bubbles, they started to pop, and guess what? Now too many of us really aren’t living another day.

Back in April, we never imagined Maine would see more than 400 new COVID-19 cases in one day, but these days 400 is the new 40. The disease is spreading so quickly in Maine that the state has all but given up on contact tracing.

“The chains of transmission are blurry at this point,” Dr. Shah said last week. “Initially in COVID, across the country, it was a series of straight lines, dots that we could connect. Now, it’s a bowl of spaghetti, and that’s the definition of community transmission.”

Yes, there’s a light at the end of the tunnel in the form of a vaccine, but that light is still only a pinhole. The experts tell us we’ll be at least into the second half of 2021 before vaccinations are as widely available as necessary, and even then we’ll have to convince the skeptics to do the right thing and get the shots.

So as the nation’s emergency rooms and morgues reach capacity, as the United States “rounds the turn” and runs smack into the previously unimaginable threshold of 300,000 deaths from COVID-19, some of us are again hoarding toilet paper, because, well, that’s what we do.

So here’s a suggestion: Stop worrying about how you’re going to wipe your butt, and start worrying about the health of your friends, neighbors, and relatives. Wear a mask (that covers your mouth and your nose), wash your hands, keep your distance, and stay home for the holidays.

Mo Mehlsak is managing editor of the Phoenix.