School and city officials speak in support of Question 5

The campaign “Yes for Schools!” in support of Question 5 on Portland’s Nov. ballot launched on Monday, Oct. 3 with a news conference outside of city hall.

School and city officials as well as parents spoke, including Board Chair Emily Figdor and At-Large city councilor Anna Trevorrow, co-chairs of the newly formed campaign. Speakers highlighted the reasons to support their initiative which would grant the school board autonomy over the school budget. 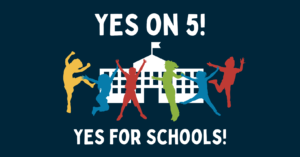 Currently, the city council has the power to vote for or decline the school budget before it goes to voters – voting yes on Question 5 would remove that step, meaning the school board would approve the budget as usual, and their approved budget would go straight to voters, rather than having a filtering or vetting process through the city council.

Proponents of the Question argued that the city council isn’t well-enough equipped to decide the school budget, particularly since they aren’t regularly involved in school processes. Question 5 would also establish a Budget Guidance committee that consists of city councilors and school board members, which would make recommendations to both entities.

Superintendent Xavier Botana said he can’t think of a policy tool that would be more important to have in the hands of his successor at the end of this school year. He said the board members he’s worked with in his time have all been dedicated to improving Portland’s schools – only to see the council reject their proposal “with minimal curiosity to engage and understand what they’re rejecting time and again.”

Portland’s Public Health Division will be offering flu shots and the latest Covid-19 booster at two upcoming clinics in the city.

The first will be from 9 a.m. to noon on Oct. 7 at the Portland Public Health Clinic at 39 Forest Ave. The second will be from 1 p.m. to 4 p.m. on Oct. 12 at City Hall, accessed via the Myrtle Street Entrance, in the Kippy Richardson Room 24. The clinics are available to anyone age 12 and older

Working with Northern Light, the city is offering these clinics to both individuals who are insured and uninsured. People 12 and older who are at least two months out from their final primary series or Covid-19 booster are likely due for the new bivalent booster. The Centers for Disease Control recommends everyone six months and older get a flu shot annually.

Those coming to either location are asked to wear a loose, short sleeved shirt, bring their vaccination card for documentation, and if you carry insurance, bring the insurance card for billing.

The popular rink at Thompson’s Point will not open this season, as the owners seek to make improvements to the surrounding facilities.

Thompson’s Point announced they are starting development of what is called the Depot Pavilion, which will have a year-round food and beverage post, site enhancements, a seasonal dock that allows access onto the Fore River, and upgrades to the ice rink infrastructure.

As such, the rink will need to be suspended for the 2022-2023 season, which would have been the eighth season.

Plans for the Depot Pavilion have been in the works for years, and the owners hope it will continue to improve the site of the popular destination, which includes the Children’s Museum of Maine, Bissell Brothers Brewing, the Cryptozoology Museum, and the seasonal concert venue among other amenities.

In accordance with the rent control ordinance, the city must establish and publish these figures.

According to the city’s announcement, which is based on data from the Bureau of Labor Standards, the annual increase percentage for calendar year 2023 is 7 percent.

Long term and short-term rental renewals for 2023 are expected to be mailed in the first week of November. The city encourages landlords and property owners to renew their registrations online through the Citizen Self Service Portal.