They are exquisitely beautiful and mind-bendingly strange, with glimmering gray filaments, bright red and purple bulbs, fine ivory gills or sky-blue flesh glistening as if with sugar.

They are the oldest multi-cellular organisms on the planet. They come from the stars, and they gave us life. They can clean, console, and cure us, and they can connect us with greater consciousness. They can save us from ourselves.

These extraordinary things are the hallowed subject of “Fantastic Fungi,” Louie Schwartzberg’s ecstatic documentary feature about the miracles that are mushrooms.

Director Schwartzberg pioneered and has made a long career of time-lapse nature cinematography, and his work with mushrooms in this film, reveling in their improbably Seussical lives and morphologies, is truly worth the price of admission: A network of waxy yellow spreads out like a million tiny toes; blue and white wings sprout from logs; a plain cup opens to reveal scarlet claws; a fine, pale web unfolds like bridal lace.

Schwartzberg also treats us to hypnotic animated renderings of mycelium, the massive underground network of fungi’s fine threads (the largest organism in the world is thought to be a particular mycelium system in Oregon) through which information moves via electrical activity. In a purple-dark underground, we watch light pulse through vast, intricate, gossamer tendrils of mycelium, and it looks like our own nervous system – that is, if it were huge, cosmic, and mysteriously benevolent.

A lot of people are very passionate about fungi, and Schwartzberg talks to some very articulate ones.

“It’s not like a vegetable and it’s not like an animal,” says food writer Eugenia Bone, “but it’s somewhere in between.”

We also hear from author (and, recently, psychedelics advocate) Michael Pollan, who talks about the “frontier” of fungi of which we know far too little; physicians, therapists, and cancer patients involved in studies with psilocybin; and several mycologists both formally and informally trained – chief among whom is the largely self-taught Pacific Northwest mushroom guru Paul Stamets, from whose book title the film takes its name.

Stamets describes fungi as “clandestine” and “tricksters,” qualities that also describe him pretty well, a famously charismatic former logger who had a formative mystical encounter with magic mushrooms as a teenager at the top of a tree during a thunderstorm. Stamets and everyone else in the film speaks of fungi in the tones of spiritual adherents, with reverence, intimacy, and conspicuous joy.

Their passion seems more and more well-founded the more we watch and hear. About, say, how fungi, in the form of penicillin, helped us win World War II. How they can suck up the toxins at oil spills, thrive, and attract new insects and birds to the damaged site. How fungi can help us recover from trauma, lose our fear of death, and understand how all creatures interconnected. How they are the interface between all life forms. How fungi, which learn, communicate, solve problems, and have intention, are in fact intelligent.

Stamets compares mycelium to the internet, then to our own brain’s neural network; and later, another mycologist suggests that our own human brain might itself have evolved thanks to fungi: that magic mushrooms eaten by early humanoids gave us intelligence. Gave us imagination. Language. God.

Fungi take on increasingly mind-blowing significance in this film, and Schwartzberg is all in, reverent and rapturous. And with the possible exception of Brie Larsen narrating a first-person fungi consciousness (saying unfortunately woowoo-sounding things like “When you sense the oneness, you are one with us”), “Fantastic Fungi” is fantastically convincing. At the very least, it makes an incontrovertible case that we should better understand fungi’s importance in the system that allows us to stay alive as a species on Earth.

And perhaps right now, as we shelter away from so many human networks and systems, and as many of us are finding unprecedented solace in the smallest details of the outside world and its new springtime, we have ourselves a great opportunity to start. 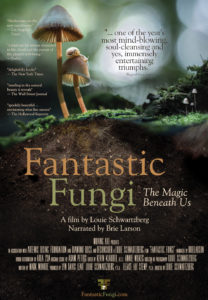 • Mayo Street Arts inaugurates its new virtual art gallery with an exhibit of works by the luminous Portland painter Paul Brahms. It kicks off with a virtual opening reception on Zoom on April 23 at 7 p.m. Visit www.mayostreetarts.org.

• The Telling Room has launched a new reading and conversation series of young Telling Room alums and their mentors, called The Living Room. April 30 will feature fiction writers Madeleine Curtis and Ron Currie. Check it out at www.tellingroom.org.

• The Theater Project in Brunswick is seeking two-minute monologue scripts of your quarantine stories. “Once we’re out,” they say, “we will perform them!” Learn more at https://www.theaterproject.com/.