A lot of things about the 2018 film “La Casa Lobo” (“The Wolf House”), by the Chilean filmmakers Cristobal Leon and Joaquin Cocina, shape-shift and melt in unsettling ways.

To start with, take its very framing: In the film’s introduction, we watch 1960s-era footage of fair-haired people in Bavarian peasant clothes cooking, singing, and working the land of remote Chile, while a slightly-too-fatherly voice speaks lovingly of “the Colony” and its famed honey, its traditional ways, and the unfortunate and untrue rumors that have, he laments, recently come to taint its reputation.

To help the world better understand the wrongly besmirched Colony, he herewith offers a film from its vault, restored “thanks to the collaboration of Cristobal Leon and Joaquin Cocina.” We might reasonably expect more documentary-style propaganda of creepily joyous Colony members.

And yet the film that starts up is one of rough, hand-painted animation, dark shapes of abstracted trees, hills, and finally a house. Here is where a disobedient young Colony member named Maria takes shelter when she runs away, after being given the punishment of 100 days in isolation for failing to tend the pigs. The house she finds is abandoned but for two pigs, and as told through Leon and Cocina’s remarkable, hypnotically eerie animation, it becomes a screen for all manner of projections and distortions as Maria, with her pigs, recreates semblances of identity, family, and home.

It’s a mesmerizingly sweet and unnerving fairy-tale-cum-horror-story, perfect for seclusion, and you can rent it online through Portland’s own Apohadion Theater.

The basic frame of Maria’s house is made up of actual live-action walls and objects. Some are essentially empty boxes, where the dirt on the floor moves by itself; others are laden with sofas, kitsch, and religious iconography. Together these spaces act as a canvas, animation cel, and puppet theater for Lepn and Cocina’s bravura and deeply strange two- and three-dimensional stop-motion animation.

Coats of paint and images painted on actual physical walls – simple renderings of doors, bookshelves, faces – wash and slip around the room. A drawn window briefly holds a swastika as it swirls into being, then dissolves again. Maria, too, is fluid in form, sometimes pooling in two-dimensions across the walls, sometimes sewing or cooking as a papier-mache doll that continuously repaints and rebuilds itself. Before our eyes, as Maria first meets the pigs – whom she will name Ana and Pedro – she grows new papier-mache arms to water and stroke them.

Suffice it to say that this story and domestic situation – narrated sometimes by Maria, softly and sweetly, sometimes by the male voice from the intro, now as “the Wolf” – soon gets weird, dark, and I would say probably not suitable for children. Identities, species, and even races are bodily created, dismantled, and recreated as we watch the characters literally deconstructed in stop-motion: the pigs’ papier-mache hooves and limbs become human hands and arms, legs and feet; the strips of paper that enwrap Maria peel themselves away, eventually revealing a core of tiny pink pieces of foam.

The sounds of all this happening are tactile but frighteningly indeterminate – a wet sluicing, a crackling – as a children’s chorale sings in the background, and as Maria’s gossamer voice describes giving the pigs clothing for Christmas, or tells of magic apples and happy little animals “falling down like breadcrumbs,” or reads the pig-children a story about a house who loved a dog so much he forbade it to go out into the world outside.

The effect is part Grimm-bleak fairy tale, part magical-realist story-ritual, part oblique propagandist warning, part creepy-yet-soothing lullaby. Specters of racial injustice, patriarchal violence, fascism, and colonialism come up in allusive story-book fashion – in the honey that the “dark children” weren’t given; the “punishments” that Maria endured in a darkened room.

What is the psychological legacy of these wrongs? We watch the world that the escaped girl creates, and we have to wonder how much of what she’s fled she helplessly recreates.

In this oblique manner, “The Wolf House” takes on the narrative and psychological vicissitudes of the real-life Colonia Dignidad, a notorious autocratic German religious sect in Chile. Its Nazi founder, Paul Schafer, used film to propagandize the community, where he committed child sexual abuse, violently disciplined the colonists, and colluded with the Pinochet regime in the torture and murder of political dissidents. The straightforward facts of the Colony are more shocking and lurid than much fiction, and have in fact been the subject of a 2013 documentary by Al Jazeera, the 2015 feature film “Colonia,” starring Emma Watson, and a 2020 documentary report by the German news channel Das Erste.

In focusing on Maria and her pig family in “The Wolf House,” Leon and Cocina’s approach to Colonia Dignidad is subtler, more interior, and so perhaps far more haunting. Without the grounding surety of a realistic story or even a physically stable setting, we’re forced to immerse in a deeper legacy of the Colony’s horrors, a psychological and metaphorical limbo that’s difficult to resolve in the traditional narrative sense.

You may even have forgotten the film’s initial framing by the time the slightly-too-fatherly voice returns to close this story of isolation, despair, and illusion. But when that voice does return, it comes promising to be both the horror’s remedy and its enforcer. 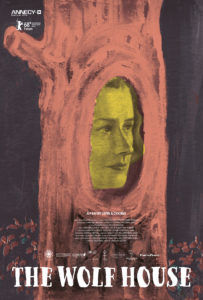 “The Wolf House,” a film by Cristobal Leon and Joaquin Cocina. Rent online through the Apohadion Theater, https://bit.ly/3cG5GJO