One moment, 15-year old Billy points out his cat’s grave in his Brunswick backyard. The next, he says, without a hint of drama or pretension: “Of course, I was at war with myself when that happened.”

A second later, he yells at his toddler brother, “Stop poking me in the balls!” and giddy mutual laughter ensues. Then: “There are still a few demons here and there,” he says of his emotional life, and not even a beat later: “Over there, there’s a hammock and a burn pit.”

As Billy gives us a tour of these various landscapes, his hairpin swerves in mood and focus are partly typical of adolescence. But his social and emotional interactions with the world are also heightened and challenged by Billy’s “different brain,” as he puts it – precocious, highly sensitive, hyper-verbal, and somewhere on the neurodivergent spectrum.

Thus our introduction to this odd and beguiling 10th-grader in Jennifer Venditti’s intimate 2007 film “Billy the Kid,” which won Best Documentary at SXSW and the Los Angeles and Edinburgh film festivals. It has now been re-released by Oscilloscope and screens online as part of the ongoing Apohadion-X-SPACE Film Series.

Billy has plenty of ordinary teenage passions. He loves heavy metal, horror movies, and karate, and has “a big interest in girls” – although, he’s quick to add, “I’m not a jerk about it.”

Venditti takes a mostly observational approach to Billy’s story, following him around with a hand-held camera as he plays his electric guitar to a KISS video in his bedroom, weathers a popular girl’s jibes at the lunch table, misses social cues from pool players at a teen center, and leaps through a snowy wood dreaming of saving damsels in distress.

We occasionally hear from Billy’s mother – about his intense tantrums as a child, about the early diagnosis that he belonged in an institution, about how far he’s come. But mostly it’s Billy who talks us through the film. He proves a disarmingly adept and candid narrator. Recalling his worst memory, of his biological father striking his mother, he says succinctly, “That’s the first and only time I’ve brandished a knife against anyone.”

Billy’s experience of the world is intensified in many ways, and Venditti effectively conveys this through subjective camera and Robert Altman-like audio techniques.

As Billy gets jostled walking down the school hallway, the camera too careens exaggeratedly out of step. In the school cafeteria, we hear as Billy might a near-excruciating simultaneity of voices and crinkling wrappers. And as Billy strides confidently down Maine Street after school, KISS’s “Psycho Circus” blares in fearless accompaniment, then falls away as his eyes dart nervously and he crosses the street looking suddenly less secure in the world.

Billy’s family history has shaped a fierce chivalry in him, and the film’s main focus becomes how he grapples with male-female relationships.

Playing a single-shooter video game, Billy remarks that he doesn’t shoot the women: “I think it’s a sin to hurt women, real or fake.” He talks at length about his mother’s first and current relationships, his fierce protectiveness of her, and his own endearingly chivalrous pursuit of Heather, a local girl who works at the diner.

This romantic quest becomes a major through-line of the film, which rather remarkably captures the relationship seemingly from its first inception, as he sits himself down in the diner a seat away from Heather and asks her, with charming formality, “Have I met you somewhere?”

One might wonder to what extent this courtship was influenced by the presence of a camera following Billy around, a question the film nods to in one terrific, tongue-in-cheek scene: Billy walks Heather across the street from the diner and behind a building – away from the camera and the gaggle of weathered old men hanging around out front.

But his mic is still hot as he asks her to be his girlfriend, and as she responds (spoiler alert), “Yeah.” And what those old guys out front express, in their hoots and cheers when the couple returns, is how we too have come to feel for Billy: We’re rooting for him, this very different but very noble kid, and we celebrate both his difference and how he’s also a lot like us.

Indeed, today’s viewers might find Billy’s heightened sensitivity, and the outsized cognitive and emotional loads that he processes, have unexpected resonance for us. As every hour of our own lives seems to bring us some new unthinkable affront to process, Billy poses a model of grace in his open calling out of wrongs, his candor about his emotions, and his conviction that we can find beauty even in difficulty.

“Sometimes life can be a pain in the butt,” Billy says. “But it’s worth it. Because usually, you find great things in life that’s a pain.”

Brave words for all of us. 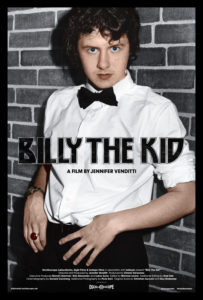 “Billy the Kid,” by filmmaker Jennifer Venditti. Streaming through the Apohadion-X-SPACE Film Series, at https://bit.ly/3j4USbl.