At this late point in the most stupefying U.S. election run-up possibly ever, let’s pause for a different election story.

Meet Boniface Mwangi, a charismatic young Kenyan activist, husband, and father who has for years fought for justice from a corrupt government. Now, he decides to work at it from the inside and runs to be a regional member of Parliament.

In a country where activists and anti-corruption officials are routinely murdered, however, his idealism proves dangerous for himself and his family. Boniface’s political campaign – and his resulting family crisis – are the story of “Softie,” an intimate documentary by the Kenyan filmmaker Sam Soko, streaming now at PMA Films.

Boniface acquired the nickname Softie as the smallest of many siblings raised in rural poverty, and he speaks powerfully about how being raised poor has affected his political passions. Being poor makes you timid, invisible, and subject to bullies, he says, and the experience made him want to work to make sure, he tells poor Kenyans, “that you matter in this country and it knows you exist.”

He has since made his life a contrast to that timidity. The camera follows him as he blazes against corruption and brute force. Early on in the film, we see him leading a luridly theatrical stunt of a demonstration involving pigs and blood as a “gift for members of Parliament.” And as tear gas, batons, and a water cannon are deployed against demonstrators, we see in shaky footage that’s electric in its proximity, Boniface is right up in the faces of the cops: “Why are you beating us?”

Boniface and his wife Njira – once an activist alongside him, and a steady, wise, and empathetic presence in the film – open their family’s life to the filmmakers with appealing candor and intimacy. The conflict between Boniface’s political idealism and his domestic life is made tangible from the beginning. In an early scene, we watch him carefully adjust a sippy-cup with one hand as he strategizes into the phone held in his other hand: “I think it’s good for us to get arrested.”

Once he tells Njira that he is running for office – on camera, never having brought the prospect up with her – domestic tensions rise. In scenes apart from her husband, Njira speaks openly about her fears and hurt, and the camera follows some hard conversations about what comes first for each of them: country or family.

Yet despite how fraught their crisis, the time we spend with the Mwangi family is also endearing and even amusing. The three children are funny, smart, ridiculously photogenic, and delightfully at ease on camera, and the film’s many domestic scenes build a strong sense of how loving and intensely bonded this family is – thus heightening the stakes and our investment in their fate as a family.

And of course, we also spend a lot of time in politics and on the campaign trail.

As Boniface shakes hands and gives out pamphlets, Soko injects occasional context about the larger Kenyan political system, through news clips on corruption and murders, as well as Boniface’s own explanation of how British colonialism created the violent tribalist tilt of Kenyan politics. In contrast, we also see Boniface’s very DIY, inclusive, and vibrant operation at work – dozens of young people in one room of his house phone-bank for him, while his vivaciously outspoken campaign manager, Khadija Mohammed, is a force of nature, telling Boniface to get off his phone, dropping f-bombs, and gleefully jumping on the back of his motorcycle.

What might be most striking for U.S. viewers about Kenyan politics is the normalization of bribery – not just among the elite leadership, but for regional positions like the one Boniface seeks. As he tours markets and streets looking for votes, it’s startling how many people respond, “Will you pay me?” – fully expecting that he will, and turning away, laughing or bemused, when he does not. Later, before dawn on the morning of the election, a near-stampede of Kenyans streams into the frame, seeking, we’re told, the regular ritual of cash for their votes. The scene degenerates into teargas and violence, and we’re never even quite sure why.

We might have a few different reactions watching “Softie” on the eve of our own U.S. election. We might feel relief that for everything wrong with our system, at least people aren’t lining up on Nov. 3 for cash bribes. We might watch the violence in Boniface’s streets and fear the specter of violence posed by a U.S. president who won’t commit to a peaceful transfer of power in a time that has seen hundreds of thousands of protesters in the streets.

For all the discord and death in Boniface’s Kenya, what I take most from Soko’s loving portrait is the power of the bonds of family and community, and how in seeking change, none of us need to or can act alone. 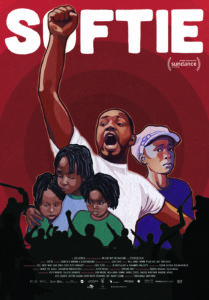 “Softie,” a documentary feature written and directed by Sam Soko. Streaming through PMA films, at https://www.portlandmuseum.org/filmscreenings/softie.

Halloween will soon be afoot, albeit in COVID-19-altered form. Here are some ways to get your spooky on from a distance:

• Should Mad Horse whet your palate for ghost hunting, you’ll want to tune in next for the Penobscot Theatre Company’s streaming “Ghost Hunting in Bangor ME” program, in which “haunt enthusiast” Ben Layman walks us through the apparently ghoul-laden Bangor Opera House. Runs through Nov. 1; https://bit.ly/3dD6sZ8.

• And if you’ve never experienced the phenomenon that is classically trained singer David Worobec’s miniature musical theater, now’s your chance to turn down the lights and tune in for a spooky one on Oct. 30: “Jekyll and Hyde,” Stevenson’s gothic novel turned musical thriller. Worobec will sing all the parts and maneuver its tiny toy characters right on your screen, as a co-production of Tophat Productions and Mayo Street Arts; https://bit.ly/2HgkrZ7.