Director Tyler Taormina’s “Ham on Rye,” a funny, dark, and often surreal look at the ritual of coming of age, is streaming now through Apohadion Films.

“Ham on Rye” follows an ensemble of dozens of young people around an affluent suburban town as, group by group, they dress up, anticipate, and slowly converge for a mysterious, momentous event. Early on, we watch three girls getting ready in white dresses that look suited, variously, for a prom, a frumpy office party, and/or a polygamous cult.

“Do we like this with my dress?” asks one, holding up a glittery purse. Beat. “I think the boys will like it,” says another. “Yeah,” smiles the first, warm and vindicated. As the girls meander their way to the big event, at one point Haley (Haley Bodell), a slight blonde girl (who you can tell is the secret skeptic loner of the group) haltingly confesses: “I’ve been thinking about Marty’s.” She pauses in the unwelcoming silence, then goes on, “Don’t you think the whole thing is, like, a little bit weird?”

This mysterious event at Marty’s is where everyone is so obsessively headed, and the prospect gets people worked up into some odd physical gestures. Several “cool” guys in a Volvo wagon laugh and head-bang to metal on the stereo, but they look to each other’s faces strangely often and long, as if compelled to find affirmation there.

Four other guys, in badly fitting suits and with downcast expressions, one of them on crutches, make their way on foot with a comically, surreally synchronized swagger.

Across the street, three more guys stare them down, then abruptly turn and scale up a chain-link fence.

Such exaggerated gazes and stylized movements permeate “Ham on Rye,” showing us a kind of expressionistic view of teenage posturing and identity-play, and making it seem at once familiar and deeply alien.

This tinge of surrealism creeps in by other means, too, often around questions of aging, the future, and happiness.

The three girls in white, reclining in a glade like alternate-reality pre-Raphaelites, read aloud a postcard (an “Astronaut’s Prayer” holograph) from an older sister, who writes: “I’m so good. Life is so good. Honestly, everything is so good.” The girls marvel. “Wow,” one of them says. “Being older is, like, really good.” They read the postcard again.

Shot in California’s San Fernando Valley, “Ham on Rye” seems to nod to Charles Bukowski’s famous auto-fictional novel of coming of age in L.A. But the agonies of Bukowski’s thinly veiled alter ego are rather brutally literal compared to those of this film’s teens.

The kids of “Ham on Rye” experience many of the tropes in a John Hughes or any other teen film – cringe-worthy or demeaning rituals, cool and not-cool kids, antagonistic or pathetically useless adults, existential angst.

But Taormina, who shares screenwriting credit with Eric Berger, and the director of photography, Carson Lund, keeps things feeling at once allegorical and tongue-in-cheek, epic and alien – three girls in pink coasting in eerie synch on scooters, dissolving into over-lush filmic overlays of cherry blossoms; a comically desperate father putting his unpopular son into a car with popular kids, then screaming at him not to blow it; a stoner philosopher exalting about the invention of math and sponges.

Once everybody gets to Marty’s, every detail and breath swim in significance. We watch sandwiches eaten in agonizing silence, in such close-up that we can see the bread expand when it’s released from hands. And the filming of the long-awaited/long-dreaded ritual itself, despite borrowing the simplest of elements from gym class and prom, casts them in such a fraught, cultish, and even mystical light that the whole event seems at once awesome, absurd, and a little terrifying.

Much like growing up itself. And indeed, the progression of the teens’ dances at Marty’s might parallel other progressions, as they move from rock-anthem-like self-declaration, to mind-blown flailing beneath a light as bright and searing as love, to the mild-melded, soporific pair-bonding of a slow dance.

For a variety of reasons, both chosen and circumstantial, some teens do not take part in the ritual at Marty’s. Haley is one of them, and in the aftermath, it’s as if all her peers have left the planet. As Haley wanders through town alone in the dark, it’s easy to see and feel the metaphorical implications, about how absolutely alienating it can feel to veer from the “normal” path.

Other people are still around, too. We see some of them sitting by fires in the dark like refugees from something, playing poker and looking bored, irritated, inconsolable, catatonic. The stoner philosopher is here, but seems to have lowered his sights since we saw him last. “We can’t see it,” he says of we’re not sure what. “But if you get a really big telescope, and look really hard,” and he pauses for just a beat as the fire crackles away, “you still can’t see it.”

Haley doesn’t join them, and she does make it through the night. We know she’s still got a ways to go, but we’re rooting for her. 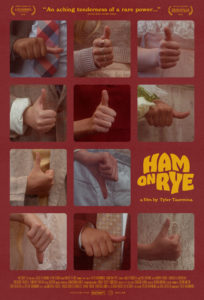