Laden with rare archival footage, interviews, and intimate scenes of Lewis among his staff and constituents, “Good Trouble,” which is screening now through Portland Museum of Art Films, is both a paean to Lewis and a call to action for those who survive him.

Lewis was born in 1940 to sharecroppers in Troy, Alabama, where he excelled at school and wanted to be a preacher. In a trademark stump-speech story, he tells of preaching to chickens as a kid: “They didn’t quite say Amen,” we hear him say early on, “but they still listened better than some people on the other side do in Congress today.”

“Good Trouble” recounts the watershed moments in Lewis’ early work alongside the icons of the Civil Rights movement – writing a letter to King in 1957 (at age 17), studying non-violent resistance in Nashville in 1960, being met by the Ku Klux Klan as a Freedom Rider in 1961, representing the Student Nonviolent Coordinating Committee at the March on Washington in 1963, having his skull fractured by Alabama state troopers on the Edmund Pettus Bridge in 1965 – and in his more than 30 years of service in Congress.

Porter takes more of a topical than a chronological approach to Lewis’ life. Instead of the straight-ahead forward momentum of many biopics, “Good Trouble” presents threads of his activism – on integration, on voting rights – from their origins to the modern legacy of each.

The resulting constellation of Lewis’ achievements and allies shows the story of American progress to be a living one – one that scores of younger activists and legislators continue. And so we hear not just from Lewis’ family and 1960s colleagues like the Rev. James Lawson and Bernard Lafayette, but first-term legislators like U.S. Reps Alexandria Ocasio-Cortez, Ilhan Omar, and Ayanna Pressley, whose own work he inspired and made possible.

Then there is the remarkable archival footage: police with batons forcing Black people out of the lines in which they’re waiting to register to vote in Selma, a young Black man being beaten on the floor next to a lunch counter, and perhaps most difficult to watch, Alabama state troopers trampling over the column of screaming marchers on the Edmund Pettus Bridge. And King and Ralph Abernathy at ease in a church basement, young SNCC members laughing together, a young Lewis speaking at the March on Washington.

And in her most powerful and affecting choice as a filmmaker, Porter screens this footage for Lewis, capturing his reactions on camera as he recalls the tall man that was his seatmate on a Freedom Ride or the Chinese-food supper he had the night before, which he knew might be his last. As we cut from the black-and-white scenes to Lewis’ face watching them, we see him visibly emotional, lips pursed, sometimes looking almost quizzical, as if it’s hard to take it all in.

“Dawn, I’m seeing footage I’ve never seen before,” he says quietly to the filmmaker after watching a clip of himself and other SNCC members enacting a “role-playing simulation” of white racists, shouting faux-hateful epithets at each other before dissolving into joyful, resilient laughter. As Lewis’ eyes well, Porter lingers on his complex silence, sits with it.

“Good Trouble” balances these weighty moments with informal scenes of banter, joy, and even silliness.

“See, my chickens are nonviolent,” Lewis deadpans to his sister, after hearing that her own are pecking at each other. “I taught them the way of peace.” And just try to get through an airport with John Lewis, as Porter does, where everyone wants to shake his hand, hug him, thank him. His effect on people is visible radiance. Such scenes show Lewis to be not just an unwavering force of bravery and resolve, but a man who will groove to Pharrell Williams’ “Happy” while a staffer films him on her cell phone (the video went viral).

Porter lands the film squarely on the need of our current moment, and on the forces that want to turn back the clock on equity and justice. She reminds us of the 2013 Supreme Court rollback of the Voting Rights Act and the 16 million people removed from voting rolls; she shows us a clip of a modern-day conservative who comes right out and says that not every American should vote.

In the face of those forces, “Good Trouble” reminds us of how much work has already been done and how powerful a narrative Lewis’ work provides for those who will continue it.

“We will get there. We shall overcome,” he says near the end of the film, near the end of his life, looking right into the camera. We hear it from a man who knows better than anyone how hard it was, and is, yet how necessary, and how possible. 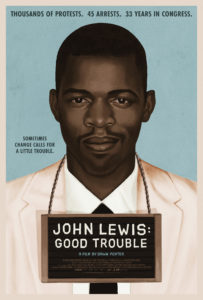 Art outside, at home

• If you missed Ziggurat Theatre Ensemble’s Camden production of “Fafalo!” – one of this summer’s very few live theatrical works – you have a second chance to see this comedy about a buffoon who becomes king: Ziggurat and the Camden Shakespeare Festival are bringing the show to Bowdoinham, where it will play outside behind the Bowdoinham Community School on Friday, Aug. 14, at 5 p.m. Theater-goers should bring their own chairs or blanket. FMI: www.CamdenShakespeare.org.

• Maine writer Stephanie Soileau’s acclaimed debut short-story collection, “Last One Out Shut Off the Lights,” chronicles an eroding sense of place and nature in the small oil towns of her native Louisiana. Soileau talks with novelist Elizabeth Wetmore, author of “Valentine,” as part of the Portland Public Library’s Literary Lunch series, on Wednesday, Aug. 19, at noon. FMI and Zoom link at https://bit.ly/2XHVQBI.