Just as so many of us are thinking about both terrifying viruses and systemic bias against marginalized people, a new film examines a realm in which these issues intersect: science.

Women remain egregiously underrepresented in STEM professions, women of color hugely more so. And the ones who are working are regularly subject to harassment, abuse, and a world of small daily slights.

Dr. Jane Willenbring, a geomorphologist who studies the effects of climate change, was so thoroughly traumatized as a young scientist, she tells us, that when her 3-year-old daughter told her she wanted to be a scientist, too, she was triggered into sobbing.

“I was thinking,” she says, her voice quavering but fierce, “of someone treating her like trash in 20 years.”

Willenbring is one of three female scientists whose experiences are charted in “Picture a Scientist,” directed by Sharon Shattuck and Maine filmmaker Ian Cheney, and screening now at PMA Films.

All three scientists have suffered to do their work, and they tell us about it frankly.

Willenbring recalls how, as the only woman on an expedition to Antarctica, the program director threw pebbles at her as she urinated, pushed her down a hill of scree, and habitually called her “slut” and “cunt.”

One day when MIT biologist Dr. Nancy Hopkins was working in James Watson’s lab as a young woman, she recounts with mild incredulity, Francis Crick walked in and put his hands on her breasts.

And Dr. Raychelle Burks, a black chemistry professor in Austin who develops safe, cheap tests to detect chemical weapons and the kind of water contamination that happened in Flint, has been mistaken for a janitor in her own lab.

“Picture a Scientist” employs the extended metaphor of an iceberg to break down its inquiry into this systemic discrimination. At its tip are the kinds of wrongs we hear about the most: overt sexual harassment and assault.

But of course, the bulk of the iceberg’s mass is underwater and out of view, as are what subjects in the film call the “subtle exclusions” of women scientists: vulgar comments, being left off an email, or ignored in a meeting – even having their equipment sabotaged.

Hopkins tells how years ago, after being denied sufficient lab space at MIT, she spent hours and hours after work meticulously quantifying how much more lab space men had than women – and then her department chair wouldn’t even look at the data.

These accumulated beneath-the-iceberg insults, it becomes clear, are not just an emotional burden but a monstrously wasteful time-suck.

As the film cuts between the three scientists’ stories from grievances to action, interspersed with supporting content from more than a dozen other female scientists, we’re also presented with simple pedagogical animations: a bobbing blue iceberg alongside lists of above and below offenses, relevant statistics about women and women of color in STEM fields, and pen-and-ink “pictures of scientists” – mostly white men, in lab coats and dark-rimmed glasses.

These drawings and fonts are in the style of an old 1950s-era textbook, on softly mottled off-white pages, and they make their points precisely, imaginatively, and with an interesting gentleness – especially compared to the graphical shock-and-awe of, say, cable news networks. The film’s visual aesthetic seems designed not just to alarm or enrage us with these awful stats and lists, but invites us to sit, consider, and engage with their stakes.

Likewise, the film’s subjects come across not just as aggrieved victims or symbols, but distinct characters – wry, no-bullshit Willenbring telling it like it is; Hopkins with her deceptively mild affect, her irony, and her appreciation for the beauty of zebrafish; high-energy Burks in a “Wakanda Forever” T-shirt. They express themselves vividly and with striking candor, sometimes glowing or near-giddy at their research, sometimes near tears at the struggle it’s been.

“I’d see a bus pass and say, ‘Bus driver. That sounds pretty good,’” Burks says of a time when she considered switching careers. And we hear more than one sharp, science-inflected metaphor for what they’ve endured: “A ton of feathers,” Willenbring says of the barrage of small insults she received, “is still a ton.”

“Picture a Scientist” moves along at a gradual but persistent pace from the abuses these scientists have suffered to the actions they’ve taken to make them known: Willenbring’s eventual Title IX complaint, the landmark report on gender inequity at MIT spearheaded by Hopkins, and Burks giving a talk on intersectionality at a chemistry conference or preparing to go on camera in her role as a science communicator.

But while it lets us experience the narrative satisfaction of these successes, the film also reminds us of how far we have to go – including via an implicit-bias test that even women in science don’t pass. The stakes for solving this, the film and its subjects make clear, should matter to everyone who cares not just about equity, but about things like clean water and vaccines.

If you shut down half of the most brilliant people doing science, as someone points out, you only get half the science. 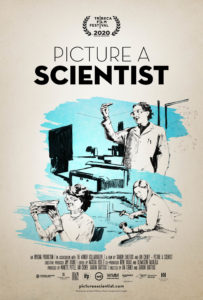 “Picture a Scientist,” directed by Ian Cheney and Sharon Shattuck, 2020, 97 minutes. Screening at https://bit.ly/3d0nUF3. Renters also gain access to a virtual Q&A on June 17 from 8-9 p.m. with the three featured scientists, two directors, and moderator Molly Webster of Radiolab.