The small desert village of Bacurau, in the outback of northeast Brazil, is close-knit, gutsy, just slightly surreal in its DIY utopianism, and uncommonly resilient.

In this very-near-future Brazil, one of water shortages, distant fires, and political unrest (which bears more than glancing similarities to the Brazil of the present), Bacurau’s resourceful, communal people have become used to being cut off from the rest of the country.

But suddenly the town disappears from maps. A UFO-shaped drone appears overhead. Odd tourists from the south pass through on motorbikes. And the people of Bacurau must band together even more closely and fiercely to investigate.

This community, with its grit, imperfections, and solidarity, stands as the remarkable collective protagonist of “Bacurau,” a scathing, singular 2019 film by Kleber Mendonça Filho and Juliano Dornelles, which is available for rental now in the Portland Museum of Art’s steadily growing online film repository. 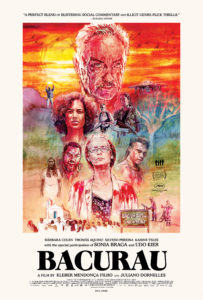 We first approach the town in a potable water truck that’s carrying home Teresa (Bárbara Colen), granddaughter of Bacurau’s recently deceased matriarch. The truck winds down long dusty roads and, at one point, slows for a traffic accident amid a pile of broken coffins – our first whiff of the ominous.

But upon her arrival in Bacurau, Filho and Dornelles spend a striking amount of early screen time developing and endearing us to the collective character of the town, as acted by a large ensemble cast of extraordinary subtlety, nerve, and cohesion.

We’re given time to see daily life here: A young woman grows vegetables for the town in an old school bus. Happy children practice musical instruments. A sex worker, honored like any other worker in town, cheerfully reveals a breast to a neighbor in greeting. In the center of town, a sort of town-crier-cum-emcee talks into a mic to announce news of a festival, a blockade, and who in town is trying to call whom on the telephone. The memorial for Teresa’s grandmother involves a procession and psychotropic drugs.

For all its pleasing communal quirks, Bacurau also holds undercurrents of violence: Teresa’s sometime paramour Pacote, who now goes by Acácio (Thomas Aquino), is said to have engaged in malicious killings. We hear allusions to a mysterious rebel-in-hiding named Lungo, who is wanted by authorities (Silvero Pereira, hypnotic, beautiful, and terrifying once he appears).

The camera moves intimately among the town’s people and places, lingers over villagers sitting around in the heat and shade, brushes up close to faces exchanging a laugh or a romantic invitation. Everyone knows each other here, and we soon feel embedded and empathetic among them.

Of course, though, something bad is happening, and part of what’s so ingeniously unsettling about “Bacurau” is how long it takes us to find out exactly what. Over the slow pacing of village portraiture, and the most gradual reveals about just what is going on with the motorbike tourists and a nearby enclave of white Europeans and Americans (led by German actor Udo Kier), the tension of the film’s slow-burn build is exhilarating.

And even once we start to sniff out what the town is facing (and which I am taking great pains not to spoil here), there still remains a bracing uncertainty about just what kind of movie we are watching. Thriller? Western? Black comedy? Afro-futurist sci-fi? Slasher? All of the above? By what narrative mode are we meant to make sense of what turns out to be Bacurau’s profoundly disturbing story?

This genre slipperiness finds pointed parallel in the complexities of the film’s larger concerns: Western colonialism, violence, race, belonging and otherness. As conflicts unfold between northern and southern Brazilians, between autonomous Brazilians and those allied with visitors from America and Europe, and between the “white” and the “black,” the “civilized” and the “savage,” we find ourselves in a damning parable of inversions, a hybrid-genre film with a question at its core: What is savagery? Who is the savage?

The squeamish should take note: this is a brutal film, both intellectually and graphically, and its violence is breathtakingly inventive. But it’s a tribute to Filho and Dornelles’ skill that some of the most jarringly violent images involve no blood or bodies at all: as when precious water spouts from bullet holes shot in the water truck, or in the close-up of a dump truck’s load of books being dumped rudely on the street of Bacurau – as a “gift” from a sold-out would-be mayor of the next town over, who also comes bearing food, addictive mood inhibitors, and coffins.

Deadpan black-comic touches like that veer the film at times into absurdist satire, just hallucinatory enough to keep us unsettled, and in its style “Bacurau” recalls, variously, Alejandro Jodorowsky, Michael Haneke’s “Funny Games,” Jordan Peele’s “Get Out,” and even Dennis Hopper’s out-there “El Topo.”

But it is certainly and utterly its own – startlingly sure, relentless, and unflinching. “Bacurau” looks at colonialism as the absurdist irony, the frontier stand-off, and the gratuitous slasher horror that it was and is, and it doesn’t blink.