It’s 1968, and the opening sequence of “Mr. SOUL!” takes us back to the era’s mainstream TV-land: the proud swaths of color in the NBC peacock, a montage of “Dragnet,” “I Love Lucy,” and “The Beverly Hillbillies” framed in an old-school TV.

We hear a first few slow, syncopated trumpet riffs and the camera slowly pedestals up from the shoes to the face of a young Al Green, singing “I’m So Tired of Being Alone” on a show called “SOUL!.” While Green sings on, we cut between images of another Black man, a stylish guy with a mustache, glasses, slightly prominent ears, and an intense but gentle gaze: it’s Ellis Haizlip, the man who became known and beloved as Mr. SOUL!.

As the show’s creator and eventual host, Haizlip, who began his career producing theater, brought a panoply of iconic Black musicians, dancers, writers, intellectuals, and activists to the American airwaves. And he put them on the air on their own terms – in an “undiluted Black show,” to use his own words – at a time when the dominant media representation of Black people involved poverty, violence, or assimilation to the tropes of white entertainment.

In “Mr. SOUL!,” filmmaker Melissa Haizlip (the subject’s niece) presents a documentary portrait of Haizlip and the community he cultivated. Streaming locally as a co-production of Indigo Arts Alliance and PMA Films starting on Aug. 28 (with a don’t-miss live talk on Sept. 2; see exciting details below), “Mr. SOUL!” is incisive, sharply shot and edited, laden with rare archival footage, and contagiously joyful.

Between 1968 and its much-protested cancellation in 1973, “SOUL!” ran for 130 episodes, spanning the Civil Rights, Black Power, and Black Arts movements, as well as activism against the war in Vietnam.

Filmmaker Haizlip does superb work in tracking all that and contextualizing “SOUL!”’s place in the nation’s cultural, political, and media history, through present-day interviews and a wealth of archival reels of MLK, JFK, RFK, and Malcolm X, all killed by 1968; of Black marchers and police violence; of the advent of Nixon and his retrograde fear-mongering.

In interviews we hear from Ellis Haizlip’s family; scholars on the cultural significance of “SOUL!”; and a plethora of people who worked or appeared on the show, including the poets Nikki Giovanni, Sonia Sanchez, and Amiri Baraka, and “The Wiz” choreographer George Faison – all of whom are radiant in their love for “SOUL!,” the community it cultivated, and the man who made it all happen.

Punctuating the interviews and archival footage are the words of Ellis Haizlip himself, voiced by Blair Underwood (Haizlip died in 1991). “’SOUL!’ offers Black performers a way to be meaningful, to be relevant to the Black experience, to say ‘Just present me as a man or a woman without justifying my Blackness,’” we hear, as the text floats in on the screen. The goal of “SOUL!”, Haizlip said, is “neither to educate nor entertain, but to give people a chance to share in the Black experience.”

And the footage of what these shows shared is priceless.

We’re treated to clips of American creators and thinkers of the highest order, some of whom were pretty ballsy choices to be airing on public television then or anytime. We catch glimpses of a fervent Stokely Carmichael and a regal Louis Farrakhan; performances by young Earth, Wind, and Fire and Stevie Wonder; Sidney Poitier in conversation with Harry Belafonte, and James Baldwin with Nikki Giovanni; and Muhammed Ali giving his devastating, acidly clear-eyed riff on why he will not be going to Vietnam.

Framing all these luminaries are the dazzlingly cool abstract shapes, colored filters, and dynamic cuts and effects of “SOUL!”’s signature look, and cinematically, “Mr. SOUL!” moves with the same savvy vibrancy of the program itself – with lots of nods to its bright palette, vintage silkscreen-style motifs and Mod-inflected fonts, and dynamic camera work.

The character of Haizlip himself emerges gradually and remains at a certain reverent distance. We hear about him much more than we hear from him, which seems in keeping with how Haizlip was in real life: for all his style and jokester charisma, his friends say, he was not a big, all-about-me personality, but a listener, a cultivator of others’ talent.

And we’re 40 minutes in before we learn, almost in passing, that he was an openly gay man, whose strict religious father had not just inveighed against “sissies” but forbade even dancing in his house – a revelation that the film uses less to delve into Haizlip’s personal life than to suggest the empathy he had for anyone on the margins and his desire to raise and celebrate difference.

Indeed, to watch Haizlip in interviews, and the beaming, gently rapt generosity with which he receives his guests, is to watch a preternaturally gifted empath. There is in Haizlip something of the Buddha, or perhaps Fred Rogers, an almost superhuman appreciativeness and above all delight in these Black artists, a reverence for creation itself. As he talks with and listens to the artists and thinkers on his show, the expression on his face is almost beatific.

Melissa Haizlip’s portrait of Ellis Haizlip’s show and m.o. is nimbly crafted, stirring, and just plain beautiful fun to watch, and it presents an arts-and-culture model for nourishing what the Rev. Dr. Martin Luther King Jr., called (and which several people in the film invoke) “the beloved community.” We’re in a cultural moment – not unlike 1968 – that makes “Mr. SOUL!” a powerful must-see.

And once you’ve seen it, look for an event that brings it home on Sept. 2 at 7 p.m: Indigo Arts Alliance and PMA Films will host a live talk between filmmaker Melissa Haizlip and Portland musician/writer/storyteller (and upcoming Indigo Arts Alliance artist-in-residence) Samuel James, along with special guests Sonia Sanchez, Felipe Luciano, and Abiodun Oyewole. Tune in, as the “SOUL!” announcer would say, “live and in color.” 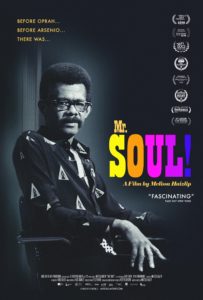 “Mr. SOUL!,” a documentary by Melissa Haizlip. Screening online through a co-production of Indigo Arts Alliance and PMA Films, at https://indigoartsalliance.me/ or https://www.portlandmuseum.org/films.