Early in “The Painter and the Thief,” surveillance camera footage shows the retreating forms of two men moved to theft, as they haul two stolen paintings from a small Oslo gallery.

Then we meet the defrauded artist, Barbora, a young Czech painter of gorgeous naturalistic portraits who lives in Oslo with her husband, and who finds herself compelled to befriend – and paint several portraits of – one of the thieves: Karl-Bertil, a bright, abundantly tattooed, self-destructive young Norwegian with criminal tendencies and a drug problem.

Barbora and Karl-Bertil form an unlikely and uncannily deep bond over art and identity in this beautiful, disarming, provocatively constructed documentary by Benjamin Ree, which streams online at PMA Films.

As befits an exploration of a portraitist and a portrait thief, Ree’s film looks close and long at his characters’ faces, both those on canvas and those in the flesh, with sometimes startling intimacy, setting up a complicated hall-of-mirrors of seeing, being seen, and being seen being seen.

We watch Barbora’s face early in their friendship as she invites Karl-Bertil into her studio and sketches him, looking at him with such wide-open, unblinking expectancy that you almost worry for him. And we watch Karl-Bertil’s face as he’s being sketched, nervous and incredulous but twitching into a grin, elated, as if aware of magic being incanted between them.

Soon, we’re watching the two of them smoking, laughing, and gazing on the regular, Karl-Bertil opening up about his troubles as Barbora looks on lovingly, if sometimes with concern, all with a tenderness so steeped in serotonin that it’s a little unnerving. Their bond does seem alchemical. They seem drawn together as if figures in some inevitable enchanted story.

Meanwhile, we watch Karl-Bertil’s larger-than-life face take shape in time-lapse on Barbora’s canvases, and we watch as the artist’s own rapt face looks, assesses, and she dabs a minute point on the canvas infinitesimally darker. Up that close, the face-in-the-making is made up of many abstract shapes before it becomes a recognizable, remarkably executed Karl-Bertil, in dark-rimmed glasses we rarely see him wear on camera, looking intense, solid, and contemplative, dipping a finger into a glass of red wine.

And the flesh-and-blood Karl-Bertil’s reaction, upon seeing this first of many completed portraits of himself, is one of the most astonishing moments of the film: his face freezes as if in shock, and then, as Barbora looks on, waiting, he moans as if involuntarily, as if in visceral, primal, animal pain.

Later, we see him gazing at himself alone, now wearing the glasses, quite literally reshaping himself in the portrait’s image. The power she wields through him, and he through her, feels archetypal, addictive, and ethically enigmatic.

The question of art as theft is implicit from the film’s beginning, and viewers will likely have been raising eyebrows as Barbora takes photos of Karl-Bertil and his girlfriend near-naked in bed, or lavishes aesthetic praise on a hole in his hand after a terrible car crash.

So it’s a relief when the film breaks from its initial perspective of Barbora as our main lens, puts up a title that reads “The Thief,” and lets us now look on Barbora with more ambivalence. We revisit some of the earlier footage, now hearing Karl-Bertil’s reflections not just on his story and troubles, but on what he knows of Barbora, her own tattoos and past traumas, and the darkness he sees in her.

Thief and painter, as it turns out, have a lot in common, and it’s satisfying to find that Karl-Bertil is at least as savvy to Barbora’s dual gifts and dysfunctions as she is to his.

Throughout, the film’s subjects are striking in how perfectly oblivious – and/or, perhaps, how perfectly performed – they are in front of the camera. Never do they speak to the filmmaker, slip him an inadvertent glance, or in any way acknowledge the circumstances of his access. I craved to know more about the filmmaker’s relationship with them and their involvement in their own creation on camera – especially so as Ree follows Karl-Bertil’s pause, on his way to rehab, to buy heroin, and some even worse choices.

Ree also keeps a few plot points up his sleeve as he makes his jumps in time, perspectives, and storylines, and pulls out some dramatic last-minute surprises he’s been saving – about the telling creative license Barbora takes with a portrait of Karl-Bertil, about the other thief (remember him?) – for the payoff. He withholds some information to shape the story in a way that leans into the sensibility of a narrative film, and I initially felt thrown by this, even a little manipulated.

But Ree’s choices have a way of deepening once the screen goes dark, and ultimately, it now seems to me, he has aptly completed a circuit of art and theft: Ree has quietly made the film itself an object lesson in the ambiguous nature of portraiture. The art of Ree’s story of art reminds us of just how many people, how much alchemy and larceny, lie behind any face in a frame. 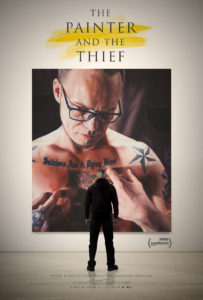 “The Painter and the Thief,” directed by Benjamin Ree, 102 minutes, Norway 2020. Rent online through PMA Films at https://bit.ly/3coOirO.