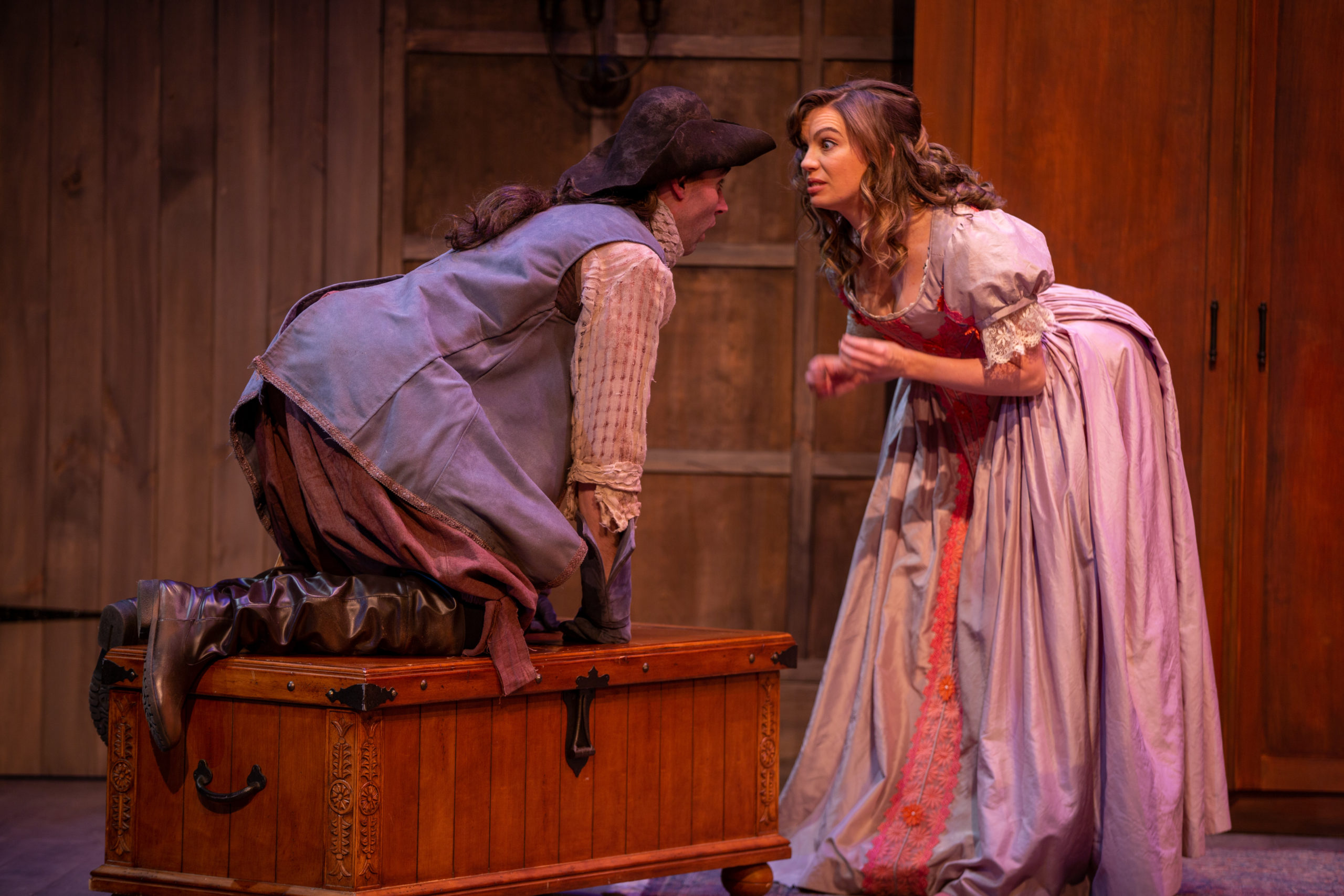 Poet, playwright, and spy Aphra Behn lives in a time of plague and fires, political upheaval, and the uncertainties of a new transition of power. That might sound familiar. But for Aphra, it’s all happening in Restoration England, in Liz Duffy Adams’s buoyant and tonally brindled comedy “Or,” a play.

The dawn of the Restoration means that King Charles II is back from exile and on the throne and that the Catholics, with their Puritanical laws and shuttered theaters, are on the way out. London is still languishing, but theaters are starting to reopen and even to allow women on the stage.

And Aphra (Rebecca Tucker), who is back in London after far-flung espionage missions, now wants to write plays, pursue pleasure, and embrace her complexities. But romantic liaisons and double agents complicate things in “Or,” in which Adams takes happy liberties with the real-life historical figure of Aphra.

As its title suggests, and as an opening monologue delivered by Tucker announces, “Or,” concerns itself with binaries:

“Our play will shortly ricochet between
“a dense array of seeming opposites:
“Spy or poetess? Actress or whore?
“Male or female? Straight or gay? Or – both?”

This bothness includes the delightfully fluid selves of Aphra and her new friends and lovers, none other than King Charles himself (Nicholas Wilder, all ease and sensuality) and famed actress and Restoration It-Girl Nell Gwynne (a saucy, gamine Haley Jones). All three are pleasure and wit incarnate in colorful period dress, and Tucker’s spirited Aphra has the warmth and gravitational pull of a lovely sun. “Luminescent,” Charles calls her, and so she is.

Onstage, spitfire Nell plays “breeches roles”; offstage, she sasses, cusses, and struts those breeches into Aphra’s arms. Charles, waggishly suggestive in a long-nosed plague mask, first visits Aphra in debtors’ jail. After a dreamily smart discussion of women’s liberation and why “power needs poets,” the two are already finishing each other’s rhymed couplets. Later, when Charles finds the knickered Nell in Aphra’s room (a simple set of paneled wood walls and furnishings), he’s just as happy to divert himself with her before he realizes she’s a woman.

And thus, refreshingly, “Or,” takes the gender-bending trope common to comedies of the era (and, before that, Shakespeare) and plays it out not as a gimmick, but as the characters’ normal fluid sexualities – which are received by each other as blissful news, but not all that surprising or big a deal.

A non-binary spirit also extends to the genre and tone of “Or,”. Billed as a sex farce, it in fact embraces the have-it-all ethos of Restoration comedy: it veers between bawdy bedroom-door antics and quick-change comedy, pensive intellectual monologue, sharp-witted social-issues banter, high-dramatic (even melodramatic) crises of conscience, and even a bit of meta theater (Aphra is, of course, writing a play herself).

Sometimes characters hide in closets or make much mugging business of rolling onto and off of laps; and both Wilder and Jones also have a couple of other character roles (including Jones’ terrific turn as an aristocratic lady who’s offered Aphra a theater contract, and who monologues at breakneck speed, tipping over like a teapot in an extravagant get-up).

Other times we hear savvy and deliciously crass political trash-talk, as when Nell rattles off how many different factions’ testicles Charles is licking or fondling as he navigates the transition. Still other times, Aphra ponders earnestly about the state of women or the world.

Much like a turbulent period of history, this stylistic ricocheting can sometimes be a little dizzying. As in most farce, the show’s emotional stakes feel somewhat precipitously heightened, and the tonal mash-up makes it more of a challenge to suspend our disbelief than it would be with a straight farce.

But Aphra and her friends are portrayed with such generosity, blissed-out sensuality, and entertaining drollery that they hold it all together. And the beliefs and hopes that drive their lives are certainly (as another meaning of the title suggests) golden.

In one long, earnest monologue, Aphra yearns in fact for a long-gone “golden age,” a time when all people were “unfettered, unoppressed, and unashamed.”

“Sounds fucking fabulous,” quips Nell. And then, more earnestly, “It sounds like now.”

The characters of “Or,” hold an explicit optimism for the future – getting past plague, oppression, and discord through art, equity, good governance, and love – that certainly has a powerful appeal in our own moment.

After all the strident ricocheting of “Or,” the play ends – just as Aphra intimates her own play does – in unexpectedly subtle ambiguity. Our final moments with Aphra, fleet and deft as a candle extinguished, pose poignant questions for our own and for any troubled time: Whose voices will we hear tell the stories, and whose voices will we remember? 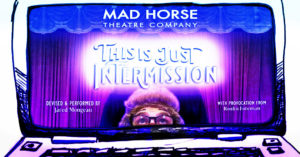 From the comfort of home

• If you think a rogue kitten filter has now set the highest bar for Zoom entertainment, be prepared to have your mind blown by actor and clown Jared Mongeau. In his newly devised work “This is Just Intermission,” presented by Mad Horse Theatre Company, Mongeau will experiment with what Zoom theater can be and do by playing with perspective, clowning, and the liminal space between the physical and the digital. The show runs live on Zoom on Feb. 19 and 26and then streams through March 7. Visit http://www.madhorse.com/.

• The ever-excellent menu of films at PMA Films now includes a fine documentary by a local filmmaker. “Welcome to Commie High,” co-produced and edited by Portland’s David Camlin and directed by Donald Harrison, looks at the history and impact of Ann Arbor, Michigan’s, Community High School, a radically holistic and anti-authoritarian experiment in public education. Now, at a time when education everywhere is being reimagined by necessity, “Commie High” offers a glimpse into ways we might imagine it more intentionally. Rental includes a Q&A hosted by NPR’s Neda Ulaby with the filmmakers and Community High educators. Visit https://bit.ly/3pgblvw.