The setting of “Age of Bees” is a landscape of chain-link, wooden crates, a power box, wraith-like sheets of fabric, and a tortured gnarl of bare branches – as if a tree had been frozen mid-writhe. This is an apple orchard post-apocalypse.

A global pandemic has resulted in more than one kind of colony collapse: the pollinators are gone and with them not only many crops and animals, but also human civilization as we know it.

But this defunct orchard becomes a nexus for young people as they reclaim knowledge, connection, and hope, in Tira Palmquist’s 2012 drama. “Age of Bees” is on stage now in rep at the Theater at Monmouth, under the spirited and dynamic direction of Eddie DeHais.

A remarkable sound sequence opens “Age of Bees,” as we hear static and the inscrutable voices of distant radio signals – first at encompassing full volume, through the theater’s speakers, and then through the small transistor radio of teenage Debra (Tori Thompson), as she moves about the orchard seeking the best signal (German Cerdenas-Alaminos’s evocative set offers plenty of hiding places and levels).

“Thirteen billion infected,” we hear amidst the static. Then, abruptly, we hear more radio noise coming from across the stage, and Debra hides in the tree as Mel (Amber McNew), a lanky young woman in overalls, strides into the orchard yelling into a walkie-talkie.

Both Mel and Debra, we learn, visit the dead orchard as a refuge from the community where they’ve wound up, which includes Debra’s pregnant mother Sarah (Charence Higgins, luminously) and a group of young girls, all under the hand of the much-feared zealot Zed. But when a stranger arrives at the orchard – a young man in camo and combat boots named Jonathan (Michael Rosas) – new ideas bloom about what survival might both demand and promise.

In the play’s fragmented dystopia, those distant voices carried over pre-internet technologies serve as flashpoints and talismans, and sound designer Rew Tippin’s superb audio work lets the theater pulse with their impact. A scrap of news or a rare disco song picked up with joyous clarity at once refocuses the characters’ reality and reminds them that there’s still a world beyond it.

These are complex characters, with rippling layers of desires, fears, and secrets, and Monmouth’s excellent cast draws them with intelligence, often devastating sensitivity, and particularly strong physical presence.

Mel and Debra are both young women, and McNew and Thompson make poignant, unsentimental work of that difficult cusp. Thompson beautifully tempers Debra’s irreverence and watchful sullenness with a shy, childlike uncertainty, an adolescent longing for feminine beauty and romantic connection, and a woman’s new awareness of her sexual power. We can see all of it flickering through her, changing her gaze and how she holds her body.

In contrast, Mel, who works to keep the power on and as a pollinator of a secret garden, resists the stereotypically feminine. Though we see her tenderly care for Sarah, Mel’s wiry, nervy body often moves with survival-mode purpose, lunging aggressively at Jonathan with a knife or edging away skittishly.

But Jonathan’s presence slowly melts this tension, and Rosas modulates winningly between the young man’s seriousness about apples and bees and his comedic playfulness. As Jonathan slowly draws Mel into ease, it’s a lovely thing to see her resting state of exuberance and wonder at the natural world.

Human connection is of supreme importance in this new world, and under the direction of DeHais (who is also a choreographer and maker of devised theater) the characters’ interactions are alive with collaborative physicality. Characters often form striking tableaux of care-taking and bodily vulnerability: Mel hovers over Jonathan, wrapping his hurt ankle even as she holds a knife in her teeth. On either side of Sarah, who’s moaning with pregnancy pains, Debra and Mel form a kind of pieta, holding her and encouraging her to join them in a hymn.

Under DeHais’s direction, song and sound are heightened among the actors as well as in the sound design. Mel announces herself by slamming a book or kicking a trash can. Jonathan enters the orchard with a cacophony of beeps, the jangling of the chain link, and a heavy, limping stomp of his one good foot. And when the women sing hymns and gospel, in transporting harmony, the beauty of the songs is deepened by how clearly precious they are to those who sing them.

In Palmquist’s rich script, many simple things take on a similar preciousness: a book about bees, the taste of a blackberry, a quick kiss from someone gentle and kind. There’s a prayerfulness to these moments, and of course, apples themselves come pre-loaded with Biblical allusions – as well as Newtonian ones and nods to Johnny Appleseed. In this sense, “Age of Bees” becomes a parable as it meditates on ethics related to self and society; the powers (and abuses) of love, sex, religion, and science; humans’ relationships with the more-than-human world, and what it means to care-take, to steward the life around us.

Between its many nuances of character, plot, and symbol, there’s a lot going on in Palmquist’s script. And its extended climactic sequence, much of which plays out at or near a 10, edges toward the overwrought. But in its subtleties, the richness of its allusions, and the depth of its characters, “Age of Bees” overwhelmingly succeeds; and Monmouth’s fine production is especially moving at a time when we have every reason to reconsider how we want to live.

Ultimately, “Age of Bees” presents a powerful gospel: good news that celebrates the simple yet profound graces of blossom, pollen, and fruit, and of our own capacity to adapt, learn, and love.

“Age of Bees,” by Tira Palmquist. Directed by Eddie DeHais. Produced by the Theater at Monmouth, in repertory, through Aug. 19. Visit www.theateratmonmouth.org. 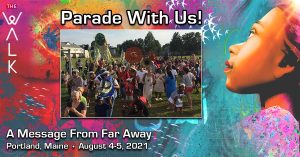 Mayo Street Arts delivers ‘A Message From Far Away’

Next week, Mayo Street Arts partners with a range of organizations to present a three-part festival in solidarity with refugees, called “A Message From Far Away.” The events center on a 12-foot puppet of “Little Amal,” a young refugee girl traveling from Turkey on a journey called “The Walk.” All three events are free and open to all:

• On Wednesday, Aug. 4, at 6 p.m, the festival kicks off with a free performance by Kinan Azmeh’s City Band in Fort Allen Park. Presented by Portland Ovations, the concert featuring the Syrian clarinetist/composer merges classical and jazz forms.

• On Aug. 5, a community procession called “Parade With Us!” gathers at 12:30 p.m. at Monument Square to make its way to Ocean Gateway. All are welcome to join this march in support of Portland’s immigrants, which will also include tall puppets and music by the Ideal Maine Social Aid and Sanctuary. The parade steps off at 1 p.m.

• Finally, at 2:30 p.m. on Aug. 5 after the parade, the festival culminates with a performance of “A Message from Far Away.” Presented by The Remote Theater Project, the show will include a concert with the Pihcintu Multinational Immigrant and Refugees Girls’ Chorus, accompanied by Kinan Azmeh’s City Band and musicians of the Portland Symphony Orchestra; a live feed of Little Amal from Urla, Turkey, on a large video wall, and the performance of “Letters to Amal,” created by playwright and Syrian refugee Mudar Alhaggi in collaboration with teenage immigrants and refugees here in Portland.