My grandfather was one of a kind.

He was an amazing husband. A sensitive father, who felt what his children needed before they even knew.

A leader in our community, who led prayers in our local mosque, performed weddings so that couples could cultivate their own families and happiness. 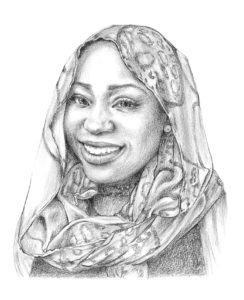 A man who asked about your health and fed you right away even if you were full because he believed food should always be shared. He would rather go hungry just to make sure someone else was fed.

And a man full of wisdom.

He has always been my hero.

He would travel the distance not just for his family but for strangers. He would say lend a hand and not just to the people you love but to humanity.

He was a natural healer, knew how to heal you just with a smile or just with few words.

I miss him always but especially today when our world is so hurt. When our communities are so disrupted. When humanity seems to be so disingenuous.

I yearn for his presence. His calm spirit, his warm hugs, and his soft voice to tell me and tell us that everything is going to be OK.

The last time I saw him was in 2014 as he was on his deathbed. He was still smiling.

He had been sick all his life but he would never take time to go to the hospital because he was spending his time caring for others.

When the doctors told us he had stage four stomach cancer, no one could sleep for days,  holding ourselves accountable for not taking him to the doctors sooner.

My body became so weak and my heart filled with so much anger. I wasn’t ready to see my hero go.

I prayed to Allah, I prayed a lot. Oh heal him ya Allah, I cried.

I tried to feed him even when the doctors told me I couldn’t.

I asked myself how a man who was so strong became so weak in these few days.

But even when he couldn’t open his mouth and speak, he spoke to us through his eyes. Eyes that always showed love and affection.

To my grandfather. My hero. My first love. Sheikh Abdulrahman, Servant of the Most Gracious, I promise to continue, not just today but forever.

My tears today are tears of happiness. It gives me great honor to be your first grandchild. To share your story with the rest of the world. To carry on your legacy as a part of my history.

I’m holding you a little tighter today and I know you’re always watching over me.

Ekhlas Ahmed is a human rights activist and educator who lives in Windham. She is the executive director of the nonprofit Chance to Advance, which raises awareness about Darfur and implements initiatives to make education more feasible for all. Follow her on Facebook and contact her at [email protected].