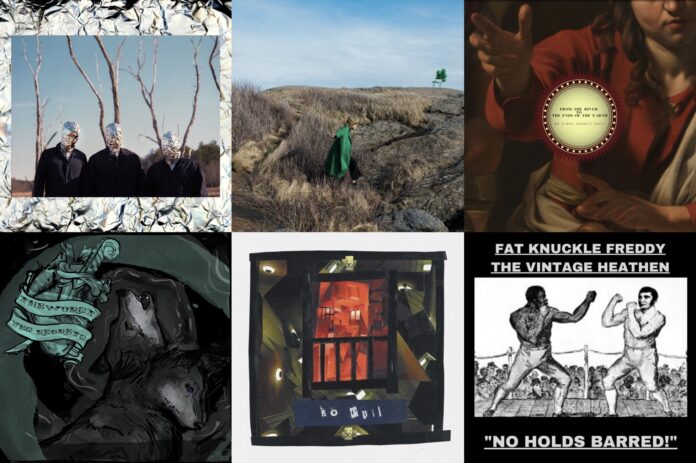 Musicians are, by and large, pretty sensitive. It’s an avocation that encourages listening, after all, and musicians tend to soak up their surroundings and — like sonic mirrors — broadcast them back out for the world to hear.

Listening to the collected works produced by Mainers this past year, it’s hard not to hear the uncertainty, the anxiety, the general sense that our society here in cozy Maine is less secure and trustworthy than we originally imagined. It’s certainly hard to find much that’s upbeat and carefree. It may well be that doom metal is where Maine’s seen the most production over the last 12 months.

So, in selecting the 10 “best” songs of the year, I’ve done my best to let that mood come to the fore. I’ve had various definitions of “best” over the 20+ years I’ve been doing this — something that stays in rotation, strong musicianship, artful, broadly appealing enough that people don’t ask you to turn it off at a party — but I’ve lately been looking for something important as a document of our times.

These are the 10 songs I want other people to listen to the most. They’ll make you think, experience emotions, and hopefully nod your head a little bit. There should be songs to dance to, to drink to, to sit with. They’re the songs I think are most likely to make you want to text them to a friend or put on when someone else is in the car.

Maybe there’s a song here that helps you understand something about yourself you hadn’t quite figured out before.

Dead Gowns – “Renter Not a Buyer” | Maybe you thought the world was one way. The pandemic declared it otherwise. Charged with a hell of a chorus, this tune gets at the uneasy alliance we’ve established with reality, where a coffee date on next week’s calendar counts as long-term plans and “I’m going to try to make it” is a firm commitment.

After dabbling with a few sounds and partners, Geneviéve Beaudoin has with the four-song “How” EP declared herself a force, with a keening vocal that knows how to lead a rock-and-roll band, even if it’s sometimes just a two-piece with acoustic guitars. “Renter Not a Buyer” is part narrative, part examination, and filled with desperation.

FonFon Ru – “Manicure Manager” | By all accounts, the indie-rock outfit FonFon Ru are on hiatus and potentially no more, but they’ve left us with a pair of great records and this distillation of the new masculinity, like the soundtrack to the inside of Harry Styles’ head. It’s melodic when it wants to be, but devolves into a chaos of uncertainty in the finish.

Genevieve Stokes – “Habits” | What a talent. While just a little bouncing two-minute ditty, Stokes manages to infuse this piece with mystery and darkness: “On again, off again / I love you like oxygen / You don’t know what I’d do, for you.”

Sole, DJ Pain, UnWoman – “Lightbringer” | While he might be exercising most of his passion in making vegan cheeses (with, like, acorns and stuff), the veteran rapper Sole’s fire for social justice still burns bright and his voice and flow remain electric. It’s rare you get something as catchy as this from Sole, so enjoy the hell out of it.

Mr. and Mrs. Garrett Soucy – “Kids’ Table” | Garrett Soucy is a seer, a visionary, a man who seems to keep the world’s secrets in a box on his bedside table. This song burns with truth, fueled by twang and harmony. What is it we want and why do we want it?

TheWorst – “Yes Regrets” | Maybe it’s the undercurrent of bass sax, but something about this tune gets at a primal frustration better than anything else this year. Brooke Binion reaches deep and manages to tap into something that seems pretty damn universal.

Myles Bullen – “Still Be Friends” | It’s hard to imagine a kinder and more approachable form of hip-hop than what Bullen is plying, which often sneakily wraps you in a soft blanket of loss and devastation. “When the whole world ends, can we still be friends?”

The Button Men – “The Baby Boomers Ruined Everything” | The “men” in question here are all just Wally Wenzel, and if you’re looking Mallett Brothers-style roots, this ain’t it. Fueled by synths, this is a stinging indictment wrapped in Devo-style groove.

Bensbeendead. – “So Evil” | Few solo artists working today know better how to construct a song, with each beat and note artfully placed. Package that with an ode to our baser selves? Bam. “How come all these people seem to know who they are, but I’m lost?”

Fat Knuckle Freddy and the Vintage Heathen – “Balls on Stage” | Need to blow off some steam? This is it. Smashing together the no-nonsense blues rock that drives Freddy with the stream-of-consciousness old-school rap of the Vintage Heathen (aka Saiyid Brent) leaves us with something that seems to come directly from the center of the earth.

These Top 10 songs are a small sample of the many excellent pieces released by Mainers this year. There are dozens more of this caliber, and others still from genre-specific and other weirdly beautiful stuff.

To get you started on exploring deeper into 2022’s best Maine tracks, I’ve put together a Spotify playlist of (currently) 96 songs (limited to one per artist) all released in 2022. The Top 10 are at the top, the next 30 or so were all in consideration for Top 10 status and then it’s a free-for-all of stuff in no particular order. I encourage listening in order, as I did some work to make it flow and bunched many of the very heavy tracks at the finish, so people who aren’t into that kind of thing won’t be scared off (don’t worry, there are plenty of heavy tracks throughout).

Find the playlist at https://tinyurl.com/ycy9ntsc, give it a listen, share it with people, and talk about the stuff you like with other people. Music is best consumed with friends.

Note: There is no question that Spotify has done great harm to musicians’ ability to earn a living. But it’s the best place to make playlists of songs released by Maine musicians. If you want to support Maine musicians in a digital way, please buy their music off Bandcamp. It makes a difference, and there’s good stuff you can only find there.