On a day marked by our time’s usual cacophony – the United States’ formal announcement of withdrawal from the Paris Climate Accord, and the publication of work by 11,258 scientists, “Warning of a Climate Emergency,” in the journal Bioscience – two poets talked in a Portland hotel lobby.

Together they have assembled “A Dangerous New World: Maine Voices on the Climate Crisis,” published by Littoral Books in Portland and available on its web site, littoralbooks.com. 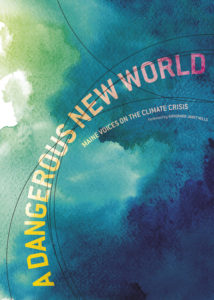 The book of poems, essays and art focuses on Maine, with a personal statement from each author or artist, gathers power in a celebration of nature and anguish for the earth.

“The scientists have spoken,” said Kathleen Sullivan, one of the two poet-editors. “Now it’s the artists’ turn.”

With 50 years as a psychotherapist, Sullivan said she understood that though counseled by some to temper the fear raised by the prospect of drought, storm and fire, without speaking and even more importantly sharing those emotions – without acknowledging despair – people will not be able to act.

Meghan Sterling, her co-editor, had a vision last winter, driving past Print bookstore on Congress Street, of writers, poets, and artists sharing their work about the climate crisis.

The book took shape when Sterling was at a reading for an anthology of poetry called “Balancing Act II,” published by Agnes and Jim Bushell of Littoral Books.

Sullivan stood up and read her poem, “Noah’s Arc Redux.” Sullivan remembered feeling dwarfed by the podium, wondering if anyone heard her.  But when she sat down, her neighbor, who was Sterling, leaned over and said, “We should do an anthology about climate change.”

Sullivan’s answer was “yes,” and that was also the answer, a few minutes later, of Agnes and Jim Bushell, who said they would publish it.

“In five minutes, it went from a vision to a reality,” Sterling said. Sullivan said she considers this work, from idea to publication, an expression of the power of the human spirit.

The “reality” is a provocative, 153-page book, with a foreward by Gov. Janet Mills, priced at $20 – the price reduced as a result of fundraising; a publisher seeking no profit; editors who plan to buy their own copies, and donated work by contributors including poets Richard Blanco and Betsy Sholl, and artists Alison Hildreth and Robert Shetterly.

Sullivan already understood that activism could lead to places you might not imagine – including the “Today” show, where she, her daughter and her daughter’s friend discussed a ban on Styrofoam enacted in Freeport in 1987, related to the growing ozone layer damage done by chlorofluorocarbons. Styrofoam was then manufactured using CFCs. The world took notice and banned the chemical. And as of 2018, the ozone hole appeared to be diminishing.

The work of putting together the book, Sterling said, “shifted us from silent anxiety to the anxiety of action.” By the end of June, the request for contributors had brought more works than could be included. The submitted work affirmed the shared sense of momentous urgency, and that individuals can be assembled into a community ready to undertake important action.

Katrina Van Dusen contributed a woodcut, “Snow Shoveling,” that celebrates a sharp-edged new path through deep snow cut by a straight-backed woman. She  wrote in her accompanying statement, “I am worried that this simple winter activity, and all the others that I enjoy, are threatened by climate change.”

“People share what they see happening – the beaches eroding, the bird song quieting,” Sterling said.  Nancy Heiser, who was assistant editor, recalled in her essay the vanished mussels that once clung to the rocks, and the now-silent spring peepers.

A poem from Freeport poet Jefferson Navicky, “The Climate Change Activist Attends a Fundraiser,” presents one side of the subject matter:

“She’s finishing her PhD thesis
“On how to depress the shit
“out of anyone instantly, she sees
“them deflate right before her eyes.”

But, Navicky writes at the poem’s conclusion, “love is the reason she did it.”

“No one wants to lose what they love,” Sullivan said, and Maine is what we love.

“Let us care for our place – the State of Maine … as we care for no other place in the world,” Mills says in her foreword.

The public is invited to a launch party at Space Gallery, 538 Congress St., Dec. 8, from 2-4 p.m. Profits from book sales will be donated to 350Maine.org. There will also be poetry and essay readings, art exhibits, around the state.

The editors suggested that perhaps the communities that gather for these events will share solar panel tips, used clothing store recommendations, and good recipes for a winter vegetable harvest, which they might start to favor over meat. Maybe someone will scrap their car.

Real change remains a possibility, Sullivan said, when people gather to share their despair and their hope.

Portland resident Nancy English is a freelance author and journalist.